Inside the PTS Curriculum: New Testament Letters and Apocalypse

This week’s course is: “New Testament Letters and Apocalypse.” 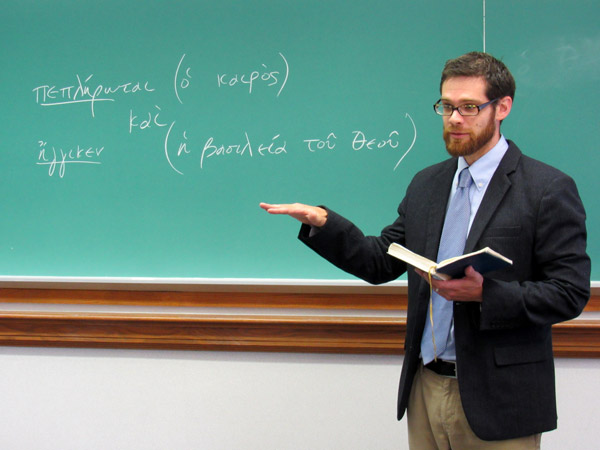 About New Testament Letters and Apocalypse

The course is an introduction to those books of the New Testament associated with the letter-form (the Pauline corpus, Hebrews, the Petrine epistles, Jude, and Revelation), showing their significance in the Church and the world today. Special attention is given to the specific content of these books, to their particular genres, to the life and theology of Paul, and to the methods used in the critical study of these books (literary, socio-historical, rhetoric), as well as to the question of pseudepigraphy.

Students in this course learn about the Jewish setting in the first-century world and the historical setting in the Greco-Roman world. They study the genres of the various epistles and the Apocalypse, plus rhetorical, literary, socio-historical, and ideological criticisms. The class looks at the content of Pauline letters, Hebrews, pastoral and catholic epistles, and Revelation in addition to the life and theology of Paul. Topics include Christology, pneumatology, atonement, eschatology, ecclesiology, tradition, mystery, and pseudepigraphy. Students learn how to read, summarize, and ask critical questions of an article and theological readings of Scripture.

The professors for this course are uniquely qualified to lead students in their exploration of New Testament. Dr. Edith M. Humphrey is the William F. Orr Professor of New Testament at Pittsburgh Theological Seminary (2002-present), and she previously taught at several colleges and universities in Canada. A prolific author, several of Dr. Humphrey’s recent books include, Further Up and Further In: Orthodox Conversations with C. S. Lewis on Scripture and Theology (St. Vladimir’s Press, 2017); Scripture and Tradition: What the Bible Really Says (Baker Academic, 2013); and Grand Entrance: Worship on Earth as in Heaven (Brazos, 2010). Dr. Humphrey is also an accomplished musician; she helps with her parish choir, participates in the PTS Taizé ensemble, and plays oboe in the North Pittsburgh Symphonic Band. She often incorporates music into her classes!

Also teaching this course is Dr. Tucker Ferda, who began his position as visiting assistant professor of New Testament in 2017 after serving as a lecturer since 2013. He earned his Ph.D. in New Testament from the University of Pittsburgh, where he also served as teaching fellow. In 2015, he was named one of only three Society of Biblical Literature Regional Scholars, an award which “recognizes and promotes outstanding entry-level scholars.” Dr. Ferda has expertise in a wide range of areas in biblical studies, including the Gospels, the life of Jesus, the Old Testament in the New, the history of biblical interpretation, Hellenistic Jewish literature, the Dead Sea Scrolls, and biblical theology.

What is a Master of Theological Studies (MTS)? 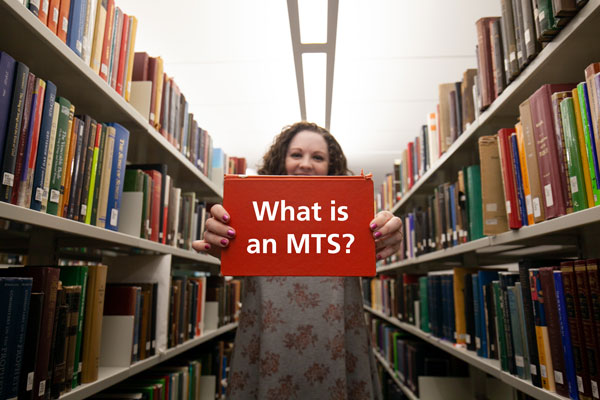 The Master of Theological Studies program allows students to focus on understanding various or specific theological disciplines and practices. As one of our most popular ,aster’s programs at Pittsburgh Seminary, the MTS degree is especially beneficial for those who desire to pursue further graduate study and doctoral research.

Benefits of the MTS Program

Many students are drawn to the MTS degree due to the practical length of the program and the opportunity to tailor their study of theological disciplines. Full-time students can complete the MTS program in two years. Throughout the program, there is flexibility for students to define a customized course of study as the basis for further research or for general enrichment. Students will be admitted to the MTS program in one of two tracks: General or Focused. Within the Focused Track, areas of specialty include Scripture and Its Interpretation and Christian Theology and Traditions.

With Pittsburgh Theological Seminary’s low student-to-faculty ratio, MTS students are able to identify one or two faculty who may be able to supervise research in their area of interest. Faculty at PTS are passionately committed to investing in each of their students. Students enrolled in the MTS program also have the opportunity to complete the Graduate Certificate in Urban Ministry. Both the certificate and MTS degree can be completed simultaneously. In addition, with Pittsburgh Seminary’s partnership in the Pittsburgh Council on Higher Education (PCHE), students can cross-register at local colleges and universities in the greater Pittsburgh area.

Another benefit to enrolling in the MTS program and being a student at PTS is having constant access to the largest theological library in the tri-state area. Students are offered unmatched resources to study, research, and explore through Pittsburgh Seminary’s Barbour Library. With a master of theological Studies degree, students can pursue doctoral work, research and writing, non-profit leadership, and/or religious education.

If you would like to further and enhance your theological education by enrolling in the master of theological studies program at PTS, you can apply by submitting the online application. If you have any questions, I encourage you to contact PTS Admissions so you can learn about even more resources available to incoming students.

I look forward to helping in any way I can as you discern what next step is right for you!

Ashley Johnson works as an admissions counselor at Pittsburgh Theological Seminary. She earned her bachelor’s from Slippery Rock University and her master’s from California University of Pennsylvania. Prior to PTS, her higher education background includes working as a graduate assistant in the Financial Aid Office at California University of Pennsylvania and serving as a student service specialist in Enrollment Services in The HUB at Carnegie Mellon University. In her current role, Ashley serves prospective students by answering their questions, providing assistance throughout the admissions process, and scheduling and coordinating campus visits.

Inside the PTS Curriculum: History of The United Methodist Church

This week’s course is: “History of The United Methodist Church.” 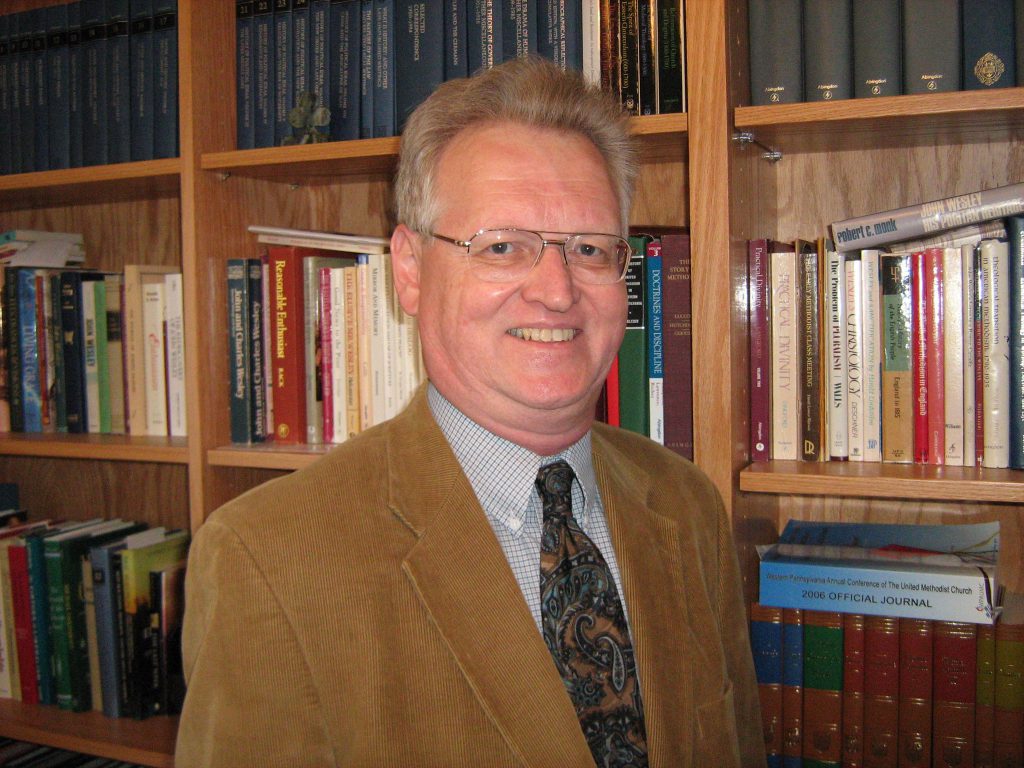 About History of the United Methodist Church

During this term, Pittsburgh Theological Seminary students will be learning about The United Methodist tradition with Dr. David Morse in the class “History of The United Methodist Church.” This course is open for students in the Master of Divinity (MDiv), Master of Arts in Pastoral Studies (MAPS), or Master of Theology (MTS) degree program. It is being offered in partnership with Wesley Theological Seminary.

This course will introduce students to the narratives that form personal and corporate identity for United Methodists today, including founders’ stories, phases of the denomination, and major developments. Some of these stories may run counter to present perceptions of the denomination. Students should note that this course fulfills the UM History requirement for election to probationary membership and commissioning in the United Methodist Church as specified in The Book of Discipline 2016. In addition to United Methodism, students will also learn about other Christian traditions that trace their heritage to John Wesley.

Students will participate through assigned readings, class attendance, and two examinations. The required texts for the course include Wesley and the People Called Methodists by Richard P. Heitzenrater and American Methodism: A Compact History by Russell E. Ritchey, Kenneth E. Rowe, and Jean Miller Schmidt.

Dr. David Morse is adjunct professor of Methodist Studies at Pittsburgh Theological Seminary. After studying at Houghton College, he received a B.D. from Harvard University, a D.Min. from United Theological Seminary, and a Ph.D. from Duquesne University. He has served as a pastor for several United Methodist congregations in Pennsylvania, including 11 years as senior pastor of Monroeville United Methodist Church.