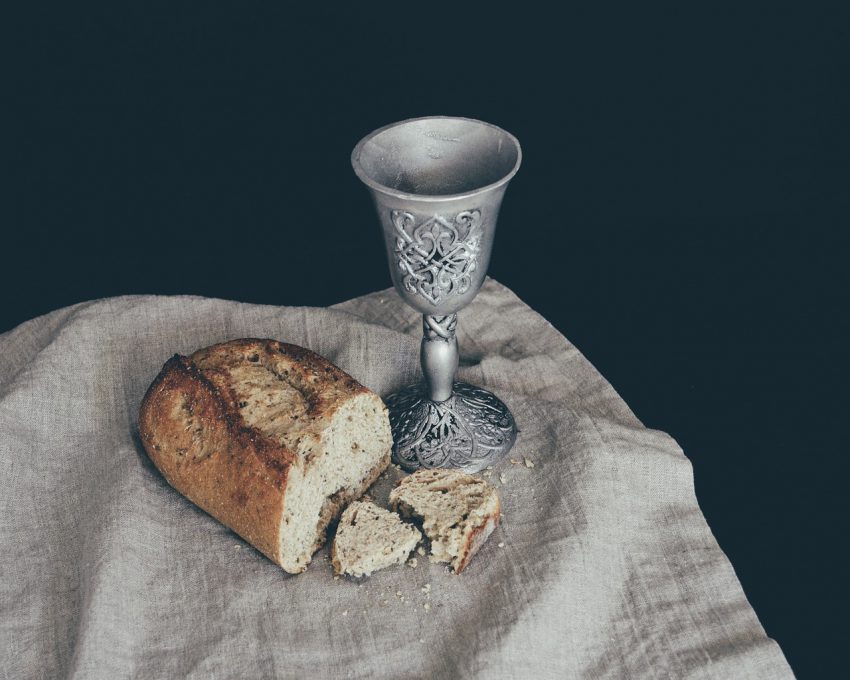 The following post originally appeared May 13, 2016, on the author’s blog as part of a series on communion.

Intinction is the style of communion where a person takes a piece of bread (often ripping it off of the loaf) and dips it into a communal cup of wine (or often grape juice). This practice is seen as early as the writing of Julius I in around 340 A.D. It way predates our use of individual cups in the pews, which doesn’t date until the 1890s.

Recently I have become aware that the practice of intinction bothers some people. People are touching the loaf and sharing germs. People often end up putting their fingers (and fingernails) into the cup, especially if they only rip off a small piece of bread. If we used wine it would kill more germs, but not all. The other problem is that some people rip off a very large piece of bread and have to awkwardly dip it and take a long time to consume it. Some people don’t care for the texture of soggy bread, and I always end up having to wipe juice off of the floor after we have intinction. I am just glad that we do not have carpeting.

When I first heard about these complaints from people in my church, I brushed it off. These people just need to get over it, right? But the more I thought about it, the more that I found that needing to “get over it” to come to the communion table is contrary to the message of the table. Communion should be a symbol of welcome, of love, and of gratitude. You don’t have to “get over” the junk in your life—sin, bad habits, guilt, shame. The whole story is that Jesus paid for those on the cross. He “got over” those things for you.

For many people, intinction becomes a time of stress, worry, and disgust. The symbol is backfiring. For many people in the pews today, communion by intinction represents the opposite of what it is meant to represent.

We could change the practice. The bread could be pre-cut. The server could dip the bread. But, in the end, I think I am not doing it anymore. I am doing communion, but that particular expression or style of communion is leaving my practice. I know that some people will love this decision, others won’t understand it, and still others will dislike it. I am personally sad to see intinction go. But the symbol is such a problem for so many people that I am willing to let it go for their sakes.

This is important not just for the practice of communion. This is exactly the kind of discussion that the church needs to be in right now. The church is full of symbols. We have hymns, liturgy, architecture, personal disciplines . . . . We have stories and metaphors. But the problem with all language, and especially with symbolic language or practice, is that it changes.

Different words, actions, and symbols mean different things in different place and at different times. For example, if I wear a shirt with a rainbow on it, it means something today that it did not mean just a few years ago. The word artificial used to mean “artfully and skillfully constructed,” but now it basically means the opposite.

We have lost touch with our symbols. Do people in our churches know why we light candles at the beginning of worship, why we pass the peace, or why we do communion after the sermon? Do people know that our worship spaces are modeled after the Jewish temple, that our ceilings are meant to look like the inside of a ship, or that stained glass was at one time the only Bible people had?

This is scary for people because it might mean we have to change. Here is the reality: many of the things we hold as sacred are not actually sacred. They may represent something sacred—like communion representing the saving life and work of Jesus. But their particular expressions are not. We know that Jesus served communion with a meal in between the elements, so it was clearly NOT inctinction. The symbols were developed to signify the sacred for a particular time and place. Maybe they don’t work as well or mean something else for our time and place.

If others want to do intinction then that is fine. I might revisit it again later, perhaps with some adaptation to help people accept it. But for now, I am going to set it aside.

5 thoughts on “Why I am Not Doing Intinction Anymore”