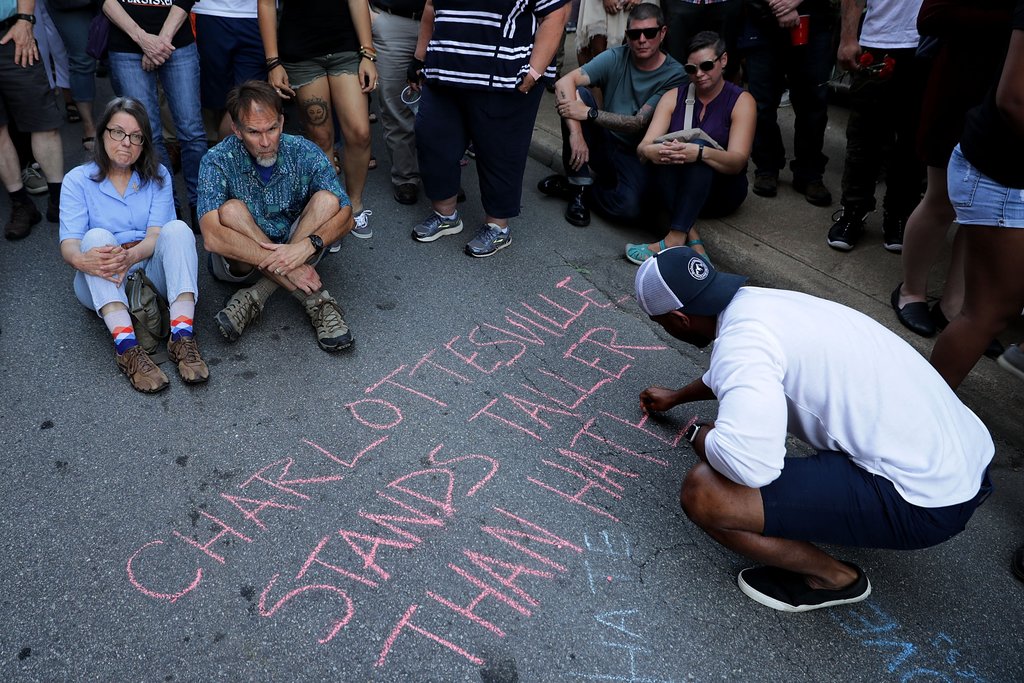 Years ago, I was serving as a short-term supply pastor for a very small congregation in rural Virginia. My third Sunday there fell on the Martin Luther King Jr. weekend, so I decided to weave a couple of sentences from Dr. King’s famous “I Have a Dream” speech into my sermon. It seemed appropriate, especially since I was preaching from the book of Amos that day.

The following Sunday, after worship, the head deacon pulled me aside and apologetically informed me that “some” people in the congregation were upset about my sermon from the previous week. When I asked him why, he explained that these congregants felt the sermon was “too political.” I was stunned, because I didn’t think my sermon was “political” at all. To me, it was simply a sermon about justice, a prominent theme in Amos: “But let justice roll down like waters, and righteousness like an ever-flowing stream” (Amos 5:24).

They’re getting “too political.”

As I watched events unfold in Charlottesville over the weekend, I wondered: on Sunday, will preachers who speak out against hatred and violence, and who publicly denounce the sin of white supremacy, be told they’re getting “too political”? I imagine many of them heard just such criticisms from their congregations.

But as my colleague Roger Owens has articulated so well (see “The Church—Political, Yes. Partisan, No.“), there’s a big difference between standing up for what we believe is right and pushing a partisan political agenda. I’ve spent the last decade of my life studying and writing about conflict in congregations, so I know that every community of faith contains a plurality of political ideas. I’m not suggesting that we try to force uniformity on every political issue. Faithful people often disagree on how we should order our common life, and that is to be expected.

Every person is created in the image of God.

Yet, over time, the church has actually reached widespread consensus on some things – and one of those is that racism, or any form of bigotry, is fundamentally wrong. It hasn’t always been this way, of course. In fact, for centuries many Christians justified the mistreatment and even enslavement of other human beings, often using the words of Scripture as their rationale. Gradually, though, we have come to see the truth that was there all along: that every person is created in the image of God and is worthy of respect, love, and care.

From this perspective, it is quite clear that any attempt to claim that some people are superior to others is a lie. It is a lie designed to sow division, to set God’s children against one another – and as such, it must be rebuked and resisted. This weekend I saw many courageous people rebuking and resisting the lie of white supremacy: the clergy members who peacefully stood their ground against armed white nationalists; the pastors and teachers who spoke out in their congregations; the citizens who used their voices to say, clearly and firmly, “this is not acceptable.”

And yet, in another sense, rebuking and resisting white supremacy feels like an awfully low bar – but it’s a bar that many white Christians (myself included) are often hesitant to cross. Maybe we’d rather not invite confrontations with our friends, neighbors, or family members. Maybe saying nothing feels a lot safer than speaking out. Maybe we’re afraid of being criticized for getting “too political.”

But the truth is: saying nothing is both a mark of privilege and a sign of complicity. Even if, deep inside, we believe that white supremacy is wrong and has no place in our churches or our society, no one can possibly know that is what we believe unless we say it clearly and show it plainly through our actions. As author and Holocaust survivor Elie Wiesel said in his Nobel Peace Prize acceptance speech, “We must always take sides. Neutrality helps the oppressor, never the victim. Silence encourages the tormentor, never the tormented.”

It is our job to work for justice.

This is a time for moral courage. This is a time for telling others what we believe, for standing up for what we know is right. It is a time for proving that our beliefs aren’t just empty words, but rather deep convictions that move us to action. Some might call this “getting political.” I’d call it discipleship.

The Rev. Dr. Leanna K. Fuller is associate professor of pastoral care at Pittsburgh Theological Seminary and teaches in the MDiv Program. Her ministry experience includes serving as associate pastor of Oakland Christian Church in Suffolk, Va., where she coordinated youth ministry and Christian education programming. She writes regularly on pastoral care and counseling, pastoral theology, and congregational conflict.