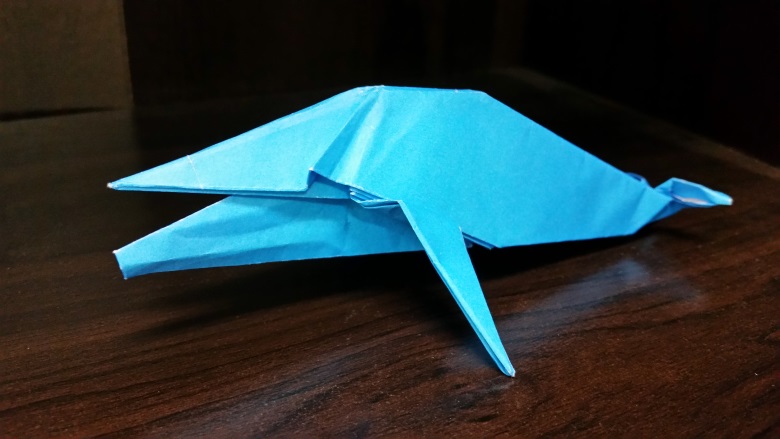 For more than 30 years, I have enjoyed the Japanese art of origami. For most of that time, creating objects by folding a single sheet of paper was a hobby. Scrap paper is literally everywhere, so finding material has never been a problem. A brightly colored ad from a magazine would become a flower. A discarded memo would end up as a crane, or a dragon. A sticky note was easily turned into a fish or a butterfly. Early on, folding paper became a way of losing myself in the creative process. Origami, like many arts, is a way of making something special out of the mundane. It is a way of seeing beauty in the ordinary, the way a sculptor looks at a block of wood or marble and envisions possibilities.

More recently, though, I have come to see origami as a devotional tool, perhaps even a spiritual discipline.

Origami as a Spiritual Discipline

More recently, though, I have come to see origami as a devotional tool, perhaps even a spiritual discipline. Whereas before it was a hobby and a way of decorating my workspace—my office now has brightly colored seagulls hanging from the ceiling, and a green Macaw perched on a lampshade!—origami has provided an opportunity for prayer and spiritual growth. During the season of Lent, when we look for ways to repent from that which is harmful to our spiritual journey, my folding took me in an unexpected direction.

Recently, two news stories, both almost lost in our current socio-political chaos, caused me to stop and ponder my place in God’s creation. The first report came March 19, when I learned that Sudan, the last male northern white rhinoceros, had died. Although there are two female northern white rhinos remaining, Sudan’s death makes their species’ extinction almost certain.

A little more than one week later, a report came from the National Marine Fisheries Service that no right whales were born in their normal calving region off the coast of Georgia and Florida. The whales have a four month span during which calves are born in this part of the Atlantic. Without young, the remaining 450 right whales have entered a critical period in their existence. As with the northern white rhino, the right whale seems to be on the path to extinction.

One night, in the quiet of my living room, I pondered what it meant to lose a species forever. Human responsibility for both species’ decline is easy enough to prove. Poaching has decimated rhinoceros and elephant species. Commercial whaling in the past greatly reduced right whale numbers and today entanglement in fishing lines and collisions in shipping lanes take their toll. Our role in their stories is as certain as it is tragic.

Feeling sad and powerless, I found myself picking up a piece of origami paper and a book of diagrams by John Montroll. As I folded first a model of a rhinoceros, then a whale, I opened myself up to God’s Spirit, and asked for … what? Absolution? A miraculous rebound of both of these great creatures, along with every other bit of wildlife that had vanished due to human expansion? There was nothing, really, that I could come up with in my conscious prayer. Their doom is spelled out, just as other species of whale, rhino, and many other animals have vanished from the earth. Even asking God to forgive humanity for all the sins that have pushed these animals to the brink of their existence rang hollow.

So I folded each model, and gave God space to move in the reality of the moment. I gave God my confusing swirl of sadness, regret, and anger. As the finishing touches were added, all I could do was to ask God, as I had so many times before, for help.

Each figure now sits on a desk, one at work and one at home. They remind me that even if I can do nothing to save them but make a donation to a charity or foundation, I can still bear witness to our reality. And may God forgive us when these and other sacred creatures vanish forever.

The Rev. Scott Fuller has served in several different positions in health care providing spiritual care and counseling for patients and their families. Currently, he is a chaplain at Life Pittsburgh.

10 thoughts on “Origami as a Spiritual Practice”