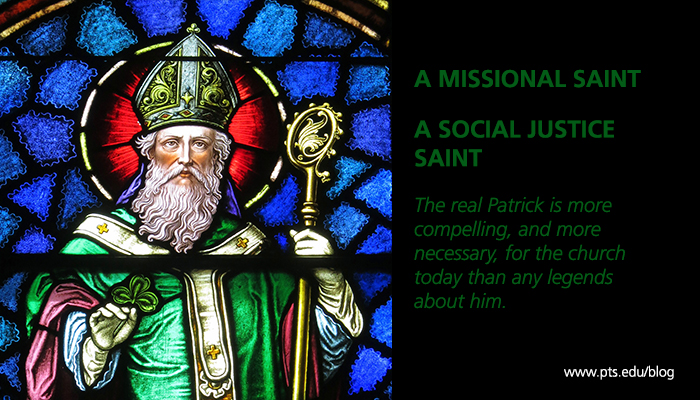 Yes, my family is having friends over this March 17, to celebrate St. Patrick’s Day. And, yes, there will be a mandatory Danny Boy sing-along. And, yes, my son’s cupcakes will have green icing and shamrocks. And, yes, we will write Celtic blessings and bless one another. And, yes, I will offer in my best Irish tenor (even though I’m not Irish; Owens is Welsh) renditions of Who Put the Overalls in Mrs. Murphy’s Chowder and The Night Paddy Murphy Died, to the delight, no doubt, of all but my children.

Here’s what we won’t do: sentimentalize the memory of St. Patrick himself. We won’t tell the kids how he used shamrocks to teach about the Trinity or regale our guests with the tail of his driving snakes from Ireland. And not because these stories don’t help us understand the meaning of Patrick.

We won’t do these things because what we know about the real Patrick, from his own writings, is more compelling, and more necessary, for the church today than any legends about him.

The real Patrick, from his own writings, is more compelling, and more necessary, for the church today than any legends about him.

At 16, Patrick was abducted from the coast of Britain and forced into slavery in Ireland. Several years later he escaped and found his way home. But in dreams and visions God called him back to carry the Gospel to the very people who had enslaved him.

Patrick tells this story in his confessions. He also tells us how he loved the people of Ireland. He lived among them the rest of his life, as he believed Christ commanded him to do. He walked the island, conversing with the people and challenging pagan practices, all the while showing them the love of Christ.

He found himself caught up in the great mission of God to bring healing and hope to the nations.

The church today can learn from Patrick. Rather than staying hunkered down in the safety of the familiar, as Patrick might have done when he returned to Britain, the church is called to be a peripatetic church, as Patrick was peripatetic bishop—a saint on foot. He walked and lived and risked his life among the people of Ireland. He was a missional bishop, the perfect saint for a would-be missional church.

As Christ was the incarnation of God’s mission to restore a broken world, Patrick shows us a picture of what it means for the church to be the ongoing incarnation of that same mission.

A letter Patrick wrote shows a different side of his character: his opposition to one of the worst social injustices of his day, human trafficking. Some Christians, newly baptized by Patrick, had been captured and forced into slavery. As a former slave himself, Patrick knew the horror of this practice. Patrick says those who “committed these evil deeds are servants of the demons.”

One can imagine Patrick being equally horrified today as human trafficking continues. I believe he would also decry all sorts of injustices that cause the displacement of people. He would advocate for refugees seeking asylum, for the return of displaced people to their homelands, for the hospitable treatment of immigrants. For, as he says in his letter, “I live as an alien and a wanderer.” He knows what it’s like to live in a land not his own.

Imagine if the church today would learn these lessons from Patrick, if we would let these two commitments shape our lives: an intentional, missional orientation, a participation in the mission of God that gets us among the people of our communities, living, listening, loving, and speaking; and a cleared-eyed commitment to justice for people wandering, for whatever reason, from their homes—people suffering trauma, needing a new start, longing for hope.

Patrick’s witness—the real Patrick’s—might be the key for a renewal of the church in service to God’s world 1,600 years after Patrick lived.

So maybe at our party this Saturday we should write blessings, not just to bless each other, but to bless our community. Maybe we should walk the neighborhood offering the blessings of God to people we meet, listening to their stories, learning to be with them.

And maybe we should write letters, letters to our representatives and letters to the editor, lifting our voices as Patrick did against the social injustices of our day.

Maybe this would be a better way to honor Patrick.

1 thought on “How to Remember the Real St. Patrick”