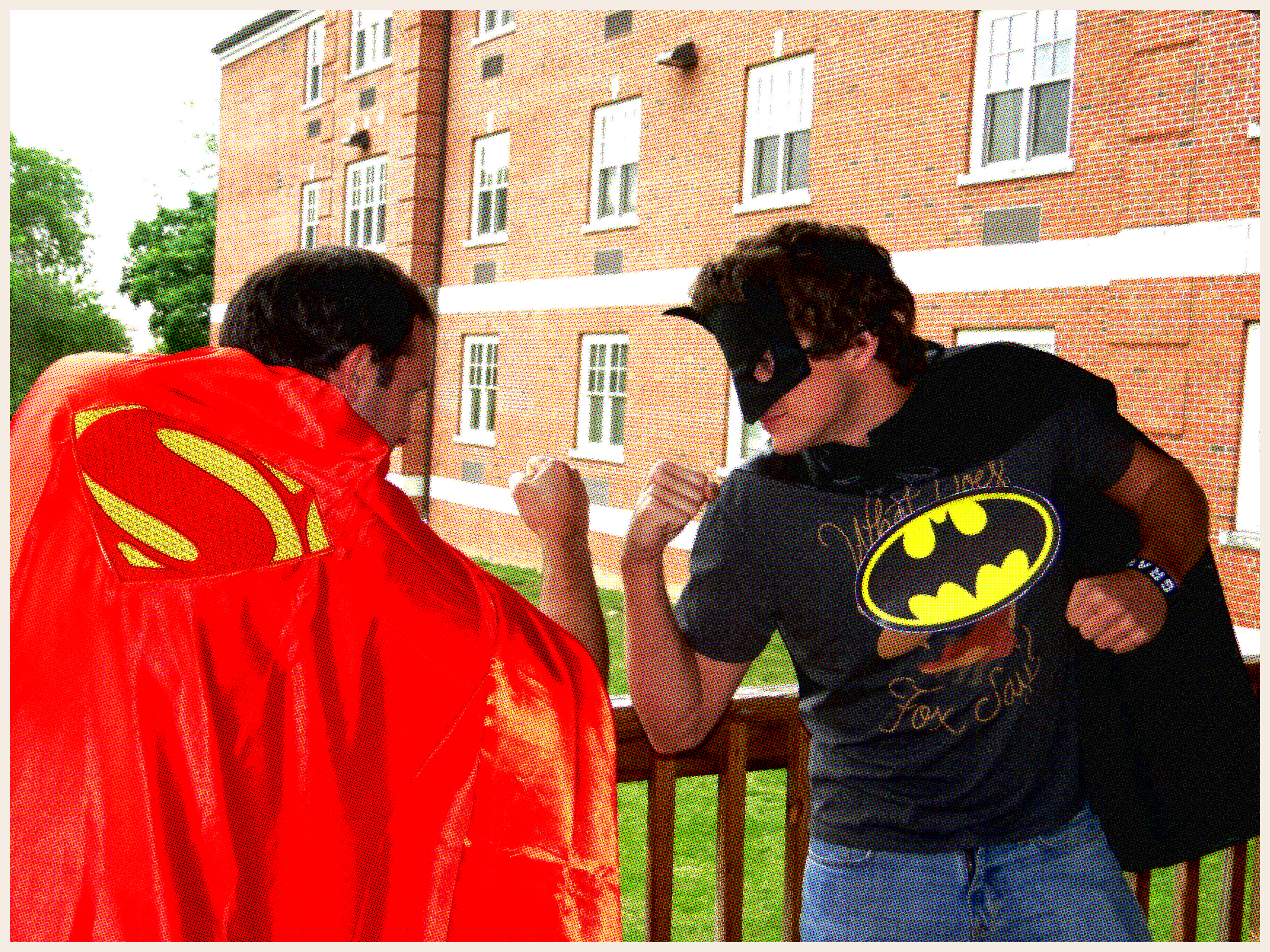 The trailer “leaked.” Be honest. You were pumped to watch it. So were people in your congregation. As a minister or pastor or preacher, you ought to know something about the storied rivalry between Batman and Superman.

If you really wanted some insight into the rivalry between these titans, you don’t have to watch the trailer. Just look at the history of the two superheroes.

The history hasn’t always been rosy. Let me show you what I mean:

Bob Kane, creator of Batman, and Joe Schuster, one of the creators of Superman, enjoyed going on double dates together. They liked telling the girls that they were out with Batman and Superman. [1]

In 1947, Jerry Siegel, one of the creators of Superman, accused his publishers and his long-time friend Bob Kane of stealing his idea. He charged that, “Batman is really just Superman with a mask on.”

Obviously, this didn’t stick. Everyone knows they’re different people. Batman is much crankier than Superman and drives a much more expensive car.

“He received the shock of his life. Then, as soon as he could collect his wits, He hastily summoned his close friend, the famous Batman, the only person in the world who is aware of his double identity.”

This quote is from the 1948 radio show “The Adventures of Superman.” When Clark Kent’s Superman costume is stolen in “Mystery of the Stolen Costume,” Superman turns to the only person he can – Batman.

Together they battled the forces of Mafioso, Biggie Conroy.

Digital copies of this radio program can be purchased easily. It’s pretty awesome in a nostalgic, historical way especially while mowing the lawn.

Didn’t expect that, did you?

It’s true. Lois Lane actually went up against Batman – and won. In the 1960’s her comic “Superman’s Girl Friend Lois Lane” actually sold more copies than Batman. The publishers considered “offing” the brooding detective until he was saved by an unexpected hero – Adam West.

Batman: Arkham City was one of the fastest selling videogames of all time, selling more than 6 million copies in less than a year.

Lego Batman holds a world record as one of the best-selling superhero video games of all time, surpassing even the Arkham games.

Superman, on the other hand, hasn’t fared so well in video games. Some people consider the video game “Superman: The New Adventures” to be one of the worst video games of all time.

In this brilliant little piece of content marketing we discover the depth of Batman’s distrust of Superman.

Ultimately they have to work together, but there are several moments over the course of this short film where Batman threatens to wage war on the “alien.”

Naturally we could have spent some serious time debating the significance of Superman as a model for American identity, or Batman as a type of cosmogonic warrior (both of which have been done convincingly), but let’s be honest. You wouldn’t read that blog, and this list will be much more practically handy when you talk to the congregant who posted the trailer on Facebook.

The Rev. Derek Davenport ’05/’17 is a PTS alumnus of the Master of Divinity (MDiv) Program and Master of Sacred Theology (ThM), between which he served at a church in Orlando, Fla., for five years. Derek also participated the Seminary’s Miller Summer Youth Institute. He serves as a preacher in Western Pennsylvania, researches church symbolism on his website, and tweets at @DerekRDavenport.

1 thought on “Batman and Superman: 7 Moments in the Rivalry”