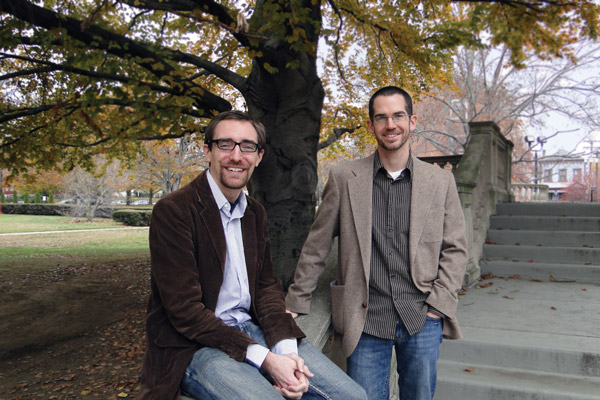 I came to Pittsburgh from Colorado to get a Master of Divinity. I wanted to be a pastor. But three months after graduation, I was serving espresso in a local café. For the next five years, the 61C Café in the Squirrel Hill neighborhood of Pittsburgh would be my employer, my community, and my mission field. This wasn’t a mistake. It was exactly where God had called me to be.

Thus I was baptized into the world of bivocational ministry and church planting. Bivocational ministry is often called “tentmaking,” following the example of the Apostle Paul at times supported his ministry through the trade of making tents (Acts 18:3). Paul’s trade provided an income for him, but it also put him in touch with a diverse group of travelers and traders every day, giving him many opportunities to share the Gospel of Jesus Christ.

When my friend and fellow alum Mike Gehrling and I answered God’s call to plant a new church in Squirrel Hill, we chose to follow Paul’s example and pursue bivocational ministry for the same reasons. We wanted not only to lighten the financial burden on a newly emerging congregation, but also to work in places that put us in relationship with the people to whom God was sending us.

So Mike took a part-time job with InterVarsity doing campus ministry at Carnegie Mellon University, building community with graduate students and faculty. And I took a job at a neighborhood café, where I became intimately acquainted with Squirrel Hill’s eclectic and eccentric population.

I didn’t need an MDiv to serve espresso or bake muffins, but I did need theological education to prepare me for the conversations that took place every day at the café. What was I to say when a regular customer told me about her struggles to care for her aging mother? Or when another customer asked for help fighting an addiction? Or when a college student plopped a book about Wicca on the counter while I make her drink? Or when coworker told me he couldn’t accept the idea that there is only one Truth?

These were real people, with real struggles, in need of real Gospel. And that’s precisely why I wanted to be there, rather than inside the walls of a church office. Over five years, our congregation, The Upper Room, has grown slowly from a small group to a house church to a chartered congregation, but I know without a doubt that some of the most important ministry I’ve done was in the café.

In February of 2014, I left the café to serve at Pittsburgh Theological Seminary as the coordinator of our Church Planting Initiative. Here I have the joy of supporting students in our Church Planting Emphasis MDiv. I’m still bivocational – serving part-time at PTS and part-time at The Upper Room – but now I have the joy of encouraging and supporting church planters as they embark on similar journeys.

In fact, two of our Church Planting Emphasis students now work at the same café where I served. There they encounter real people, with real struggles, in need of real Gospel. As students, they’re engaged in bivocational education, practicing ministry both in and outside the Church. In so doing, they’re both being formed for the future of the Church and following in ancient apostolic footsteps.