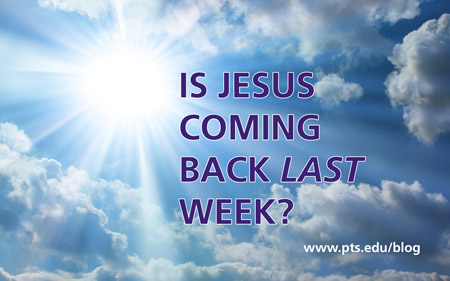 Last week, a site called eBible Fellowship declared that May 21, 2015, had been Judgment Day, and anticipated that the world would end on Oct. 7, 2015. Just last month, due in part to the tetrad of lunar eclipses this year, many folks predicted (building on the writings of John Hagee and Jonathan Cahn) that the world would end on Sept. 23. Yet, these self-proclaimed prophets are not discouraged or dissuaded: Cahn, asked why no calamity had befallen the U.S. as he had predicted, told Pat Robertson on The 700 Club that the disaster could come anytime between now and next September.

We have, it seems, an insatiable appetite for this particular way of misreading Scripture. But the problem with these failed predictions is not simply that they have misinterpreted the Bible’s predictive prophecies—implying that sooner or later someone will get it right. The deeper problem with this way of reading Scripture, and indeed with anyone who claims to find a future history in the Bible, is that the Bible does not present a future history. At all. Period.

When prophets talk about the future, they do so to influence their present—to call their people to repentance by declaring where they are headed if they do not change course. For example, Jeremiah predicted that Jerusalem would fall to Babylon, but he also delivered to his people God’s challenge: “if you do not oppress the alien, the orphan, and the widow, or shed innocent blood in this place, and if you do not go after other gods to your own hurt, then I will dwell with you in this place, in the land that I gave of old to your ancestors forever and ever” (Jer 7:6-7, NRSV). Although their present course would lead them into exile and destruction, the possibility of a different future lay before them, if they could only claim it (although Jeremiah doubted that they could or would do so; see Jer 13:23). Rather than presenting an infallible vision of a fixed and unchangeable future, Jeremiah’s predictions were conditional, depending upon whether Jerusalem repented, or not.

Indeed, it is not at all difficult to find unfulfilled prophecies in Scripture. The most famous example is Jonah 3:4, where the prophet (after a fishy detour!) at last arrives at Nineveh to deliver the message the Lord has given him: “Just forty days more and Nineveh will be overthrown!” (CEB). But it does not happen. The people of Nineveh repent in sackcloth, and God changes God’s mind (Jon 3:10). This is deeply disturbing to Jonah, but not surprising. Jonah had not wanted to deliver God’s message of judgment against Nineveh because he knew that God was likely not to follow through—that God would show mercy, leaving Jonah with the stamp of the false prophet whose predictions had not come true (Jon 4:2). Of course, that was exactly what had happened. No wonder Jonah is so angry!

Consider as well the many predictions in the New Testament that the end of the world would come soon (for example, Mk 13:30; 1 Cor 7:29-31; Rev 22:12, 20), which, taking them at face value, clearly did not come true, either. Within the New Testament itself, this delay is seen as a sign of God’s grace: “The Lord isn’t slow to keep his promise, as some think of slowness, but he is patient toward you, not wanting anyone to perish but all to change their hearts and lives” (2 Pet 3:9, CEB).

It is finally Jesus himself who puts to rest the pretense that, if we are only clever enough, we can read our future in the pages of Scripture: “But nobody knows when that day or hour will come, not the angels in heaven and not the Son. Only the Father knows” (Mk 13:32, CEB). If Jesus does not know, then certainly we do not, and cannot, know. The Bible is not tomorrow’s newspaper. It is word of God for the people of God, yesterday, today, and forever.

The Rev. Dr. Steve Tuell serves as the James A. Kelso Professor of Hebrew and Old Testament at Pittsburgh Theological Seminary. He regularly blogs at The Bible Guy and tweets at @Tuellbibleguy.

9 thoughts on “Is Jesus Coming Back Last Week?”