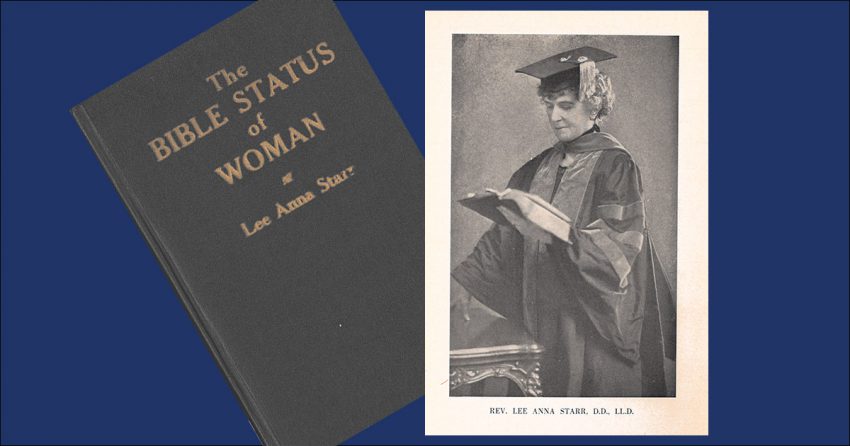 In celebration of Women’s History Month, Pittsburgh Seminary remembers its first female graduate, Dr. Lee Anna Starr (1853-1937). Dr. Starr graduated in 1893 from the Allegheny Theological School, an antecedent institution of Pittsburgh Theological Seminary. She was ordained in the Methodist Protestant Church in 1895 and became an accomplished pastor, a leader in the Women’s Christian Temperance Union, a biblical scholar, and an author.

According to Lyman Edwin Davis, Dr. Starr served “with notable efficiency in the pastoral office” at College Church (Adrian, Mich.) and Avalon Park Church (Chicago, Ill.). She also made a name for herself as a lecturer in favor of temperance, even being imprisoned for her role in the movement in 1873-74.

“Anna Starr was a Greek scholar interested in the place of women in history, both in Old Testament times, and the Christian era,” Arthur K. White wrote. “She believed that Christian women were being denied their rightful privileges in the church because of a misunderstanding of scriptural injunctions seemingly directed against her liberties.”

In 1900 she published The Ministry of Woman, a booklet making the biblical argument that women had a right to preach. She later wrote The Bible Status of Women (1926), a thorough exegesis of Old and New Testament passages concerning women.

In the book’s preface, Starr wrote: “Believing that the prejudice of the past has obscured the teachings of God’s Word concerning the status of women and her rightful place in the Divine plan, the author has undertaken the writing of this volume, and now commits it to the prayerful consideration of open-minded readers of both sexes.”

Historian Kristin Kobes Du Mez notes that Starr was able to construct extensive pro-feminist revisions because she was an expert in biblical languages of Hebrew and Greek. Along with a contemporary, Katharine Bushnell, Dr. Starr contested key components of Victorian social order, believing that “traditional Christianity bore substantial responsibility for the social, political, and legal inequalities women had suffered throughout Western history” (Du Mez). Together, says Du Mez, they “sought to provide a basis for a profound re-visioning of Christian theology and thereby challenge the Victorian social order in which they lived.”

An endowed scholarship at PTS, the Lee Anna Starr Endowed Scholarship, is awarded to incoming students on the basis of commitment to theological education.

A copy of The Bible Status of Women is available in the Barbour Library.