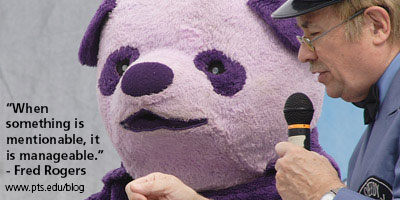 Call it what you will, but sometimes in life the stars just align and the smallest of moments change our lives forever.

Flashback to my senior year in high school a zillion years ago. I was actively involved in a local telethon to raise money for Children’s Hospital of Pittsburgh… a great tradition among local schools. Someone (I don’t remember who) had arranged for a visit from the one and only Mr. McFeely, aka the “Speedy Delivery Mailman” from Mister Rogers’ Neighborhood to come by for a guest appearance. Mr. McFeely, known in real life as David Newell, is also the public relations director for Rogers’ production company, Family Communications. He arrived at the telethon with a big plastic box containing the PURPLE PANDA costume. Just in case someone missed this along the way, the Purple Panda was one of the characters occasionally seen in the Neighborhood of Make-Believe. Long story short, someone who was at least 5’8” and who didn’t mind being mauled by children would need to wear the suit. Yours truly quickly stepped up to the plate. (Okay, I probably would have taken out anyone who tried to beat me to that suit.)

Being hugged by a long line of children was excellent, but getting a chance to talk with David Newell became life-changing. When I told him I was planning to study communications in college, he quickly invited me to stop by the “Neighborhood” someday to see what this career path might be like. I did. And one visit led to a series of internships and experiences working with the Neighborhood throughout my college years. Getting to know Fred personally, along with the wonderful characters on-screen and off- who were dedicating their lives and their talents to making good children’s television programming, was nothing short of a dream come true.

The jobs assigned to me were rarely boring. I spent a lot of time stuffing envelopes (typical intern work no matter where you are and yep, that was boring). I gave tours of the set to Make-a-Wish kids and their families. This taught me how much a heart can feel. I learned to speak “Fred” and answered fan mail on his behalf, although he reviewed every single letter and would often request changes before signing them. The words “I like you just the way you are,” eventually rolled naturally off my lips. I got to drive Fred back and forth from a set where the crew was filming episodes, and it was during those drives that we got to talk about life, and faith, and theology, and that maybe I should think about going to seminary. It was in his office one day that he suggested that I consider Pittsburgh Theological Seminary rather than the seminary my college professors were recommending. “Pittsburgh,” he said, “would be a better place for you to find your voice.” I didn’t realize that day how significant those words were, but they came to be true and I have treasured them all of my life.

Every moment of this opportunity in my life was incredible, especially having Fred Rogers as a mentor and friend. Yet one day was particularly special. I actually appeared in an episode and was a participant in a cake decorating contest along with Chef Brockett. (Remember him?) The contest was part of a week-long series of shows on the theme of competition. As the story went, Chef Brockett did not win the contest. Neither did I. He then sadly pays a visit to Mr. Rogers’ kitchen where the two have a talk about winning and losing. Mr. Rogers comforted the Chef by reminding him that his bakery was the very best in the neighborhood. Most important, they had a heart-to-heart conversation about how it feels to be disappointed. Yes, the episode was about competition, but as is so often the case in Neighborhood episodes, there was an underlying message about finding your voice, speaking the truth about your own feelings, and talking the hurt through with someone you trust. Fred was often known to say, “When something is mentionable, it is manageable.” Talking life’s disappointments and heartaches through with someone you trust is so very important. Finding your voice is essential.

In comparison with today’s television production, episodes of Mr. Rogers’ Neighborhood can seem simplistic, choppy, and stilted. But how fortunate we are that these episodes will now be available via Netflix for this and future generations of children? Seldom, if ever, has television tackled the meaningful feelings that Fred Rogers faced head on through the Neighborhood. Fear. Jealousy. Loss. Anger. Family. Differences. Hope. Love. It’s all to be found there in the Neighborhood. When these are mentionable, they are manageable.

It was important to Fred way back when, that I find my voice. Through his honest exploration of feelings, and his unwavering message of acceptance and love to children over the past six decades, I believe I am but one of millions whom he encouraged in this way. The world misses him. I miss him. You probably do, too. Thanks be to God for the gift of his life. And thanks be to God that his message will continue to touch lives.