I keep a lot of the little notes of encouragement that students leave on my desk to look at when times are tough. They’re awesome:

Hi J…stay awesome. You are the coolest. Thanks for everything. I swear your prayers helped me.

And indeed, when times are tough I need only look just beyond my computer to my bookshelf to see the affirmation of students. It’s enough to lift me out of a funk. It’s enough to keep me moving. These post it notes, and this is saying something, can be almost as effective as coffee when I need a kickstart to my day.

These notes however have the potential to be deadly. I, being human, struggle a lot with pride. I struggle with the thought that I am in fact the coolest. That I am in fact awesome. I am tempted to run in this direction from time to time, which makes a much bigger deal out of ME than I could possibly be.

And so I added a new post it note to my bookshelf:

The first line in the doxology seems particularly important. The blessings in my life aren’t my own. They’re not a result of hard work and dedication, hard work and dedication are the stewardship of blessing. I am not cool. Seriously, find my high school year book. I am not cool. I don’t have all the answers. I don’t know everything. My world is not perfect. And that’s ok. God gives me all that I need to get through the day. God gives me all I need to survive.

By Jason Freyer, an MDiv student at Pittsburgh Theological Seminary who is involved in youth ministry.

Follow this link for more blog posts by Jason: http://www.j-blog.net/

“You know who Abraham is, right?”

It was Wednesday evening, a time that had grown to become my favorite time of the entire week, for I would spend about an hour with sixth grade girls talking about God, well, that is after they updated me on their boyfriends, Justin Bieber, and the Kardashians.  I loved watching them grow and earnestly seeking God, asking me questions that most adults are afraid to admit even having.  This particular night, I had been explaining why the significance in the sacrifice on the cross and the fulfillment of the covenant.  They didn’t understand what I meant by the latter part, so I started explaining about the covenant with Abraham but I could see in their eyes the glazed over expression of not understanding.  I paused, then asked the question that hosts the title of this blog, and received this in response.

I swallowed my surprise and used the rest of the time guiding them through what I could of Genesis, prescribing to them to read specifically the story of Abraham for the following week in case more questions would arise.  And they did, as usual.

That was months ago, but it still haunts me, for those girls are now seventh graders who will one day become adults and potential leaders of the church, yet the stories that are fundamental to their foundation are not being woven into the fiber of their beings.  And if the Word is not in the framework, what’s going to hold the house together?  Granted, yes, each of these girls are of church attending familes who’ve been bequeathed Bibles of their very own and thus have ample opportunity to read it themselves. The thing is, children do from example.  I myself grew up in a church going Christian home, but I always remember there being dust on the family Bible.  In fact, there probably still is, and it wasn’t until at college that I came to know and understand it’s significance in my daily study.

What will we decide our future to be? 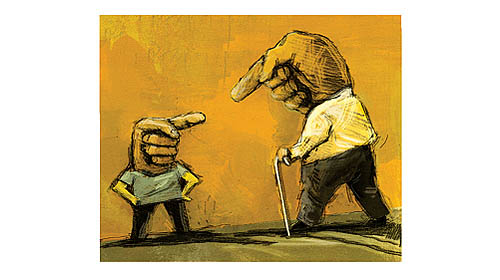 Will the Millennial Generation repair the culture divisions left by the Baby Boomers?

The problem is us, says The Rev. Dr. N. Graham Standish
The Rev. Dr. N. Graham Standish is pastor of Calvin Presbyterian Church in Zelienople and an adjunct faculty member at Pittsburgh Theological Seminary (www.ngrahamstandish.org).
In 1996, preparing for the long-term future as the new pastor of a declining church, I searched for information to help me reach the older generations that were committed to religion, and the younger ones walking away from it. I was looking for secular, generational information to give me insight into the present and potential future trends impacting our culture.

In the process I came across two generational authors who had a unique approach to understanding the future. In a series of remarkable books, starting with “Generations,” written in 1991, historian Neil Howe and political scientist (and founding member of comedy troupe The Capitol Steps) William Strauss, peered back through 400 years of American history to anticipate the first decades of the 21st century.

They made some bold predictions that seemed unlikely at the time, yet which proved prescient. That early in the 21st century the United States would experience a crisis probably brought on by a terrorist or military attack on U.S. land or interests. That this event would lead us to engage in wars with Third World countries. That we would face an economic crisis similar to that of the crash of 1929 and the Great Depression. And that the country would go through a Great Unraveling as political parties became more polarized than could be remembered in a lifetime.

As the years have passed, I have been amazed at how unfolding events verified their predictions.

How did they predict the events we’ve experienced? They did so by looking at the social, political and economic characteristics of the dominant generations at the time of previous major American crises: the American Revolution, the Civil War and the Great Depression and World War II. During each great societal crisis, the nation (or colonies) was dominated by a similar individualistically-oriented, idealistic and ideological generation.

According to Mr. Strauss and Mr. Howe, these generations have always sparked a spiritual and religious awakening in their youth, an economic boom in their young adulthood and a societal crisis in their middle age. We undergo these societal crises about every 80 years because that’s how long it takes for a new idealistic, individualist generation to rise again.

What causes the culture to enter a crisis whenever an individualistic, idealistic generation comes into societal power? Several factors. First, they distrust institutions and work to tear them down. In other words, government, churches, schools and other institutions are considered untrustworthy and incompetent, so they are weakened.

These weakened institutions leave us unprepared for threats that have always stalked the country — military or terroristic ones undetected by weakened intelligence-gathering institutions (Pearl Harbor and 9/11, for instance), risky financial speculation sparked by banking and business deregulation (1929 and 2008), international and societal tensions brought on by an ideologically divided populace, and political gridlock brought on by ideological political and cultural fighting that obstructs our ability to develop pragmatic solutions.

Our culture is presently dominated by such an individualistic, idealistic generation: the Baby Boomer generation. This dominant, ideological, individualistic generation’s strengths have always been in breaking down barriers. They broke down the stifling “square” culture of the 1950s and ’60s that left the country stagnated in many ways, a culture then led by the G.I. generation — a civic-minded, communally-oriented generation.

As teens and young adults, Boomers were foot soldiers in the civil rights movement, protested the Vietnam War, removed a paranoid and corrupt president, paved the way for freer sex and individual expression, and restarted a stagnant economy by spurring an individualistic entrepreneurial spirit. In their older age, having become more conservative, they have sparked the religious evangelical and libertarian Tea Party movements. Whatever movement they triumphed, it was always focused on the individual.

Throughout their lifespan they have been mostly uncompromising: “Don’t trust anyone over 30,” “Hell no, I won’t go,” “Trickle-down economics,” “Deficits don’t matter” and “Government is the problem.” In general they have approached the world ideologically, seeing compromise as a weakness. Throughout their lifespan they have divided society, including religion. It’s no accident that all Protestant religious denominations are rapidly splitting, led by a mostly Boomer leadership.

Our Baby Boomer leaders are so certain of their rightness, whether on the right or the left (on the left as teens and young adults and mostly now on the right), that they have led us into a constant cultural division by refusing to look for pragmatic answers to our Boomer-inspired crises.

Mr. Strauss and Mr. Howe have written that historically it’s not until these ideological generations pass from power, allowing a more pragmatic, communally oriented, civic generation to take their place, that these crises are overcome.

The last civic generation was the G.I. Generation, which Tom Brokaw called the “Greatest Generation” because they fought heroically in World War II and rebuilt the world afterwards. The next generation like them is the Millennial generation, who are now teens and young adults. This generation, having grown up in constant group activities that require pragmatic compromise and trust, will be the generation that comes together to solve the problems created by us Boomers.

Throughout our culture, leaders keep looking for who the culprit is in our nation’s inability to solve our problems. They are quick to blame those in the other party, the younger generations for being too hedonistic or lacking in drive, the poor for lacking self-reliance, Wall Street for being too greedy or other countries for being too socialist.

As a Baby Boomer myself, it would be nice to think that my generation would be able to solve the major problems of our culture, together. Perhaps some big event will lead us to act together, but with all the big events we’ve had over the past 20 years that haven’t led to a sense of unity, my money is on the Millennial generation.

And I think they know it. Popular teen fiction these days is all about teens fixing the world after the adults have messed it up. Whether we are talking about the Harry Potter series, or post-apocalyptic series such as the Hunger Games, Divergent or Uglies, it’s the teens who take on the task of putting back together what their Boomer parents have torn apart. Perhaps they are training themselves to clean up our messes.