The Clifford E. Barbour Library was constructed in 1964 on the new campus of Pittsburgh Theological Seminary in the neighborhood of East Liberty in Pittsburgh, Pa. The library building was named for Clifford E. Barbour, who became the first president of the new Pittsburgh Seminary. Barbour, a Pittsburgh native, had graduated from Western Seminary and was awarded a Ph.D. from University of Edinburgh, Scotland, in 1927. He was pastor for many years at the Second Presbyterian Church of Knoxville, Tenn., and also dean of the School of Religion at the University of Tennessee. In 1949 he was elected moderator of the General Assembly of the Presbyterian Church in the U.S.A. In 1951 Barbour became president of Western Theological Seminary in Pittsburgh. 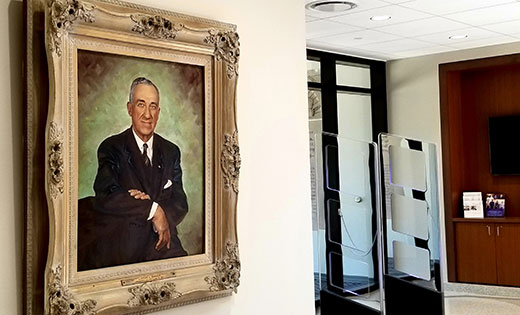 The library quickly outgrew its location in Long Hall and plans for the construction of a new three-story brick building facing the school’s quad were made. The dedication was held Sept. 21, 1964 with Dr. Barbour in attendance. The keynote address was given by Dr. Martin Niemöller, a noted German Lutheran pastor who was a leader of the Confessional Church in Germany and was arrested and held prisoner for his part in Christian resistance during the Nazi era. He was also, at the time of this address, a president of the World Council of Churches, a position he held from 1961-1968. More than 700 guests attended the dedication ceremony. To further mark the occasion, Dr. Markus Barth, son of Dr. Karl Barth of Basel, Switzerland, and PTS faculty member from 1963-1972, arranged to have his father’s desk and chair as well as other objects brought from Germany. He presented these treasures to the Seminary in 1964. Included with the gift of the desk at which Karl Barth wrote his theological works is an autographed copy of his Kirchliche Dogmatic I/1.  Th desk is presently on display in the Hansen Reading Room on the second floor of the library. 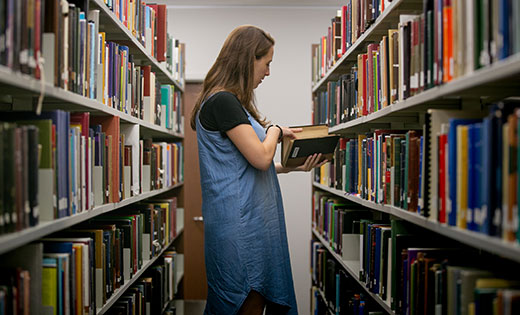 The core of the present library collection is composed of the materials from those libraries as well as books from their predecessor schools. In 1826, the Rev. Joseph Kerr, first professor of theology of Allegheny Theological Seminary, purchased the first volumes for that school’s library with his own money. In 1830 the Rev. Allen Ditchfield Campbell visited England and Scotland on behalf of Western Theological Seminary and acquired more than 2,000 volumes for that school’s collection. These initial purchases, along with gifts and purchases over the years, helped develop a historic collection particularly rich in Reformed theology, church history, and Bible. More recent collecting has also emphasized missions and global Christianity, ethics, and American religious history.

With almost 300,000 volumes, 88,000 micro forms, more than 800 periodical subscriptions, and a growing collection of electronic resources, the Clifford E. Barbour Library now contains the largest theological collection in the three-state region, and is among the largest of stand-alone seminary libraries in the country. The Library also houses archives and a variety of special collection materials.