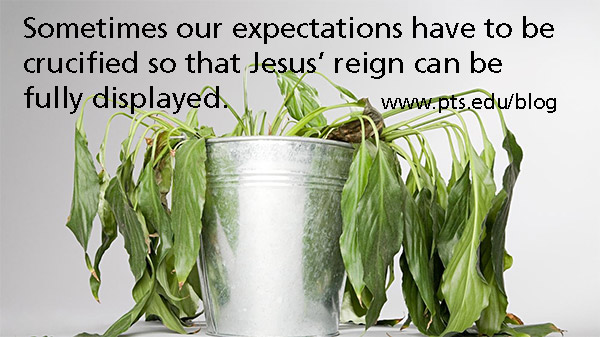 “We need more five-year church plants,” said John Ogren. He was Skyping into our “Planting and Leading New Churches” class at Pittsburgh Theological Seminary, part of the M.Div. Church Planting Emphasis, and reflecting on his experiences in a new church that started, lasted a few years, and then for a variety of reasons, didn’t continue.

It was the first day of class, and our students who had assembled to learn how to plant a (presumably successful) church, seemed relieved to begin with a story of supposed failure. John described how ministry and mission have a “cruciforming” effect upon us. We can receive this as a grace: By following Jesus in mission, we are formed more into his likeness, including his death. Sometimes success is crucifixion and failure is preserving our lives.

“Failure” is not uncommon in church planting. One study suggests that only 68 percent of church plants last for four years. Two speakers coming to Pittsburgh Theological Seminary this month have been a part of new churches that didn’t continue: A church plant which Rachel Held Evans (Being Church, June 10-11) was part of failed and Mark Scandrette (Invitation to Simplicity, June 26-29) has written about his failed attempt to plant a particular kind of church in San Francisco.

The way we approach church planting can make a significant difference in how likely our new worshiping communities are to be sustainable. But there are also a host of other factors beyond our control which affect sustainability. And when for any combination of reasons a ministry has to call it quits, a ministry’s task becomes dying with faithfulness to the mission Christ gave it. So what does a faithful death look like?

I like Mark Scandrette’s approach. A dozen years ago he wrote that in the wake of seeming failure, his community “needed to go back to the Gospels and rediscover the goodness and beauty of the kingdom of God. Jesus is the place where reconstruction begins.”[1] Death became a launching point. Experience of failure led Mark and his family to explore “a more primal pursuit of Jesus and his kingdom . . . practicing and imitating Jesus’ life in our neighborhoods: eating with the homeless, creating art, engaging in classic spiritual disciplines, practicing hospitality, etc. Our vision has changed from a house-church movement to an indigenous Kingdom movement.”[2]

Sometimes our expectations have to be crucified so that Jesus’ reign can be fully displayed.

Christians believe resurrection follows death. Otherwise we would be “of all people most to be pitied” (1 Cor 15:19). We’re supposed to be set free from the fear of death (Heb 2:15). So what might our ministries—new and old—look like if we didn’t fear institutional death?

Last fall, our Church Planting Initiative hosted a conference at Pittsburgh Theological Seminary about multi-cultural church planting. In one of his plenary talks, Jin Kim, founding pastor of Church of All Nations, described his church’s identity as a “high risk, low anxiety church because Jesus is Lord.” If Jesus is sovereign, we can take risks for the sake of witnessing to him, even risks that may lead to worldly “failure.” So why do we think we can add one hour to our churches’ lives by worrying about them?

My own church plant might be starting to think this way. I’m accepting a call to a church in another part of the country and will be gone in a couple months. The church we planted in Pittsburgh has dedicated and incredibly gifted leaders, but the transiency of our young demographic means we keep sending people out each year, and those losses are getting harder to replenish. As our elders imagined what could happen in the church in a couple years, one said that if it were to die, it shouldn’t be because of complacency. Rather, she said we should “take the reins and do something big” so that if we die it happens “in a blaze of glory” because we’ve remained faithful to our mission.

Amen. Jesus didn’t die because he gave up. He died because it was essential to the mission the Father had given him to bring resurrection life to the whole world.

For any church to follow that pattern will mean it takes a few risks, wades through lots of uncertainty, and experiences some suffering. But that’s what we’re called to do. The PC(U.S.A.)’s Book of Order actually says that the Church is called to be faithful in mission, “even at the risk of its own life.”

Death can be as much success as it is failure.

Death for a new church (or any other ministry) can be success as much as it can be failure. Sometimes it will be both at the same time. But a ministry’s degree of success and failure is not determined in terms of sustainability, as though sustainability is an end in itself. Rather success and failure are determined in relation to faithfulness to the mission God has given. A church or ministry can be sustainable but unfaithful. Or we can bear faithful witness to the reign of Jesus Christ and find ourselves broke and worn out. In which case do you think God’s power is more likely to be displayed?

As Romans 8:28 says, God works all things for the good of those who love him. The next verse says that we’re destined “to be conformed to the image” of Jesus. That conformity again includes both crucifixion and resurrection. The death of a ministry can be holy if it dies like Jesus: giving wholly of itself in fidelity to God’s mission in the world. Out of such deaths, the Spirit will bring new life.

1 thought on “When Church Plants Die”