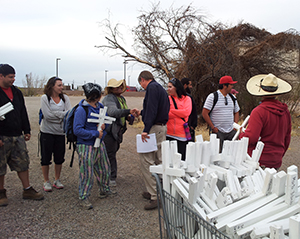 Immigration is a ministry of social work. Jesus conjoined the commands in Deuteronomy 6:5 and Leviticus 19:8 in response to the question posed by a Scribe: “What is the greatest commandment?” The result found in Matthew 22:37-39 is, “You shall love the Lord your God with all your heart, and with all your soul and with all your mind. This is the greatest and first commandment. And a second is like it: You shall love your neighbor as yourself.” This second command is the cornerstone text used by Christians in support of immigration reform.

The immigration issue has been a lightning rod in American politics often invoking vitriolic responses. Some will say the Republican Party failed to win a bid for the White House because their anti-immigration position alienated a growing Hispanic population in this country. But just this week news reports quoted former Governor Jeb Bush of Florida as saying, “The way I look at this is someone who comes to our country because they couldn’t come legally, they come to our country because their families—the dad who loved their children—was worried that their children didn’t have food on the table. And they wanted to make sure their family was intact, and they crossed the border because they had no other means to work to be able to provide for their family. Yes, they broke the law, but it’s not a felony. It’s an act of love. It’s an act of commitment to your family.”

Just as Jesus came among us (Emmanuel) one can only fully understand the lives of migrants by being among them. Through a World Mission Initiative cross-cultural trip, MDiv, MDiv/MSW and MA program students at Pittsburgh Theological Seminary have taken a look at the immigration issue up close and personal. In the past, I’ve led a team to Agua Prieta, Mexico, a town just across the border from Douglas, Ariz. The Presbyterian border mission, Frontera de Cristo, hosted us. For a week, we worshiped and fellowshipped with residents of the town, visited mequiladora factories, lived on a day’s wage of a mequila worker, and shared a meal with migrant workers. Some of them were attempting to cross the border for the first time while others lived in the US for years before deportation. We walked along the pathways in the desert where many have traveled in the cover of darkness escaping the watchful eyes of Border Patrol, listened to the testimonies of clients of C.R.R.E.D.A, a drug and alcohol recovery center, who as part of their recovery fill water buffaloes in the desert for migrants. But perhaps most riveting was the weekly prayer service for the men, women, boys, and girls who lost their lives attempting to cross the border. In good or bad weather, a group of the faithful gather in the parking lot of a McDonalds behind a van full of white hand-made crosses with the names, date of birth, and date of death of the persons found in the desert. If the person could not be identified, the cross would simply say, “No Identificado.” Each of us with an arm full of crosses, paraded down the Avenue of the Americas and one by one, called out the name of the person on our cross and shouted, “Presente!” as we stood in surrogacy. Afterwards we laid the cross on the curb. The result—a line of more than 100 white crosses dotting the curbside of the Avenue of the Americas lighting the way to the border checkpoint.

One cannot look at the issue of immigration without looking at the cross.

The Rev. John Welch is a 2002 graduate of Pittsburgh Theological Seminary. He earned his MDiv degree, served in parish ministry at Bidwell United Presbyterian Church in Pittsburgh, and is now the Seminary’s vice president of student services.

7 thoughts on “Immigration: A Ministry of Social Work”