In Spring 2022, Pittsburgh Theological Seminary students traveled to the Arizona/Sonora, Mexico, border as part of the Seminary’s master of divinity degree required intercultural learning experience. They listened to churches, migrants, a Border Patrol agent, and Mexican and U.S. pastors, who shared what it meant to their community to care for the widows, orphans, and migrants around them. Here two MDiv students reflect on their experiences. 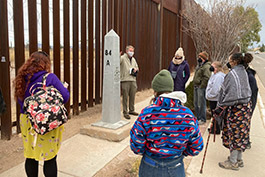 Every step of this trip I could see God working.

As I stood at the border and gazed onto the harsh and sharp razor blade wire, I was reminded that the border means that we are neighbors and as someone from Pittsburgh I naturally think of Mr. Rogers’ neighborhood. Mr. Rogers (a PTS alum) showed the world how to treat people as worthy of respect and love. It caused me to think about how we treat our neighbors and what our actions and inactions say to those around us. The wall at the border is definitely not welcoming to the neighborhood next to it, but what about here at home? Are we building up borders that hurt and destroy our neighbors, or are we welcoming our neighbors in a way that says they are worthy of love, respect, and dignity? 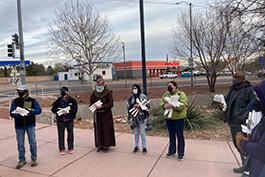 Agua Prieta, Mexico, and Douglas, Ariz., are siblings separated by a cold, looming eyesore of a wall, which slices between like the door of a jail cell separating “US” from “THEM.” As physical of a border as it is, 18-30 feet high with barbed wire, what it represents is an arbitrary line of difference, of imposed separation, of thinly-veiled racism and privilege, of un-Christlike rejection of our fellow human. It is a line that stretches hundreds of miles into both horizons and straight through the human heart. Its glaring floodlights and watching cameras reveal and record the constant drama of human desperation, need, and the extent of human greed and brutality. Mothers perish from thirst after traveling thousands of miles to make a better life for their children. Fathers and sons are conscripted at gunpoint by cartels to carry drugs across the border when all they wanted was a fair shot at safety, an honest living, and a future where their family would not need to fear gang violence and government massacre from U.S.-trained and U.S.-equipped forces. U.S. policy fuels the brokenness there, with no end in sight. It was a very dark place, but it was not without light.

In the midst of such death, pain, and brokenness, there were helpers. In our time with the Christian organization Frontera De Cristo, our hosts and guides, we were able to hear the stories and witness the faithfulness of people in this troubled context. There was Sarah (not her real name), who is 19 years sober and took up the torch of her deceased husband to run a drug rehab center where those who lost themselves get a new lease on life. There was Juan (not his real name), a father and husband who risks his life at a migrant resource center to help those who get tossed over the border into Agua Prieta, unaware of the cartel ready to pounce on fresh bodies for modern day slavery. There was Elena (not her real name), mother of six, grandmother of 22, who learned to read and gained the confidence to give back to her community by teaching kids to garden, literally and metaphorically building an oasis in the dessert. There is Café Justo, a café and fair trade coffee company that hires folks in recovery to help them reenter society, as well as offers fair prices for coffee beans to farmers who would otherwise be exploited by the capitalist machine by the power of the North American Free Trade Agreement. These, and many more, were ways we saw God moving in Mexico. What I most enjoyed was joining hearts with brothers and sisters in Christ despite language and cultural difference, enjoying laughter and sharing tears because we are all truly the same. My eyes are opened more to the crisis at the border, which requires me to wrestle with what following Jesus looks like with such knowledge on this side. How shall I then live? I will be chewing on this question forever.