For the Rev. Dr. Fred McFeely Rogers (1928-2003) ’62, every day started with welcoming his neighbor. Fifty years ago, he launched a creative and enduring ministry anchored in Pittsburgh but reaching around the world: Mister Rogers’ Neighborhood. As creator of this longest-running program on public television, Fred walked into the studio each day saying, “Dear God, let some word that is heard be Yours.” And through his more than 900 episodes of the internationally acclaimed children’s program and his more than 200 songs, he communicated the love of God through his always-gentle manner and ever-reassuring words. March 20 marks his birthday, celebrated by many as “Sweater Day.”

As creator of this longest-running program on public television, Fred walked into the studio each day saying, “Dear God, let some word that is heard be Yours.”

The day after his graduation, Fred received an invitation to make his own children’s program—in Canada. He accepted, and a year later he returned home to Pittsburgh, where he turned the show into the half-hour production Mister Rogers’ Neighborhood. After two years as a local show, the program went national in 1968. The final episode was taped Dec. 1, 2000, but the timeless messages of Mister Rogers’ Neighborhood have ensured its airing both now and well into the future. Fred once said in an interview, “The underlying message of the Neighborhood is that if somebody cares about you, it’s possible that you’ll care about others. God in his great mercy accepts us exactly as we are. Who could ever stand if God’s faithfulness did not endure?” 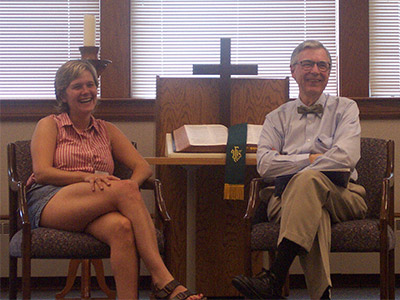 Over the years Fred continued to attend classes and lectures at Pittsburgh Seminary. Without fanfare, he would slip quietly into the back row just as a presentation was about to begin, then leave just as quietly at its conclusion. By 1978 the Seminary had already recognized his valuable contributions to the world and so named him a Distinguished Alumnus. In the 1990s Fred became involved in the Seminary’s Miller Summer Youth Institute, a program for high schoolers to explore their calling, engage in local ministries, and earn college credit. He spent time talking with the youth about their hopes and fears, plans for the future, and possibilities for vocation. In 1997 Pittsburgh Seminary presented him with the John Anderson Award of Merit—the school’s highest honor, bestowed in recognition of the recipient’s service and contributions to the Seminary community.

The late William P. Barker (the voice of Neighborhood’s Dr. Bill Platypus and Bill’s wife, Elsie Jean) once remembered that in Fred’s office was a plaque bearing the Greek word for “grace.” “Knowing Fred as my closest friend, I can testify that grace informed and inspired every facet of this remarkable man’s life and career.” Modeling himself after Jesus, Fred spent his life inviting the children to come—to become his neighbor. And he became theirs by the way he lived, both on and off the television screen.

So in recognition of the birthday of our beloved alumnus (plus the March 23 debut of the USPS stamp bearing his image), Fred McFeely Rogers, and the 50th anniversary year of Mister Rogers’ Neighborhood, we at Pittsburgh Seminary say enthusiastically, “Yes—we’ll be your neighbor!” 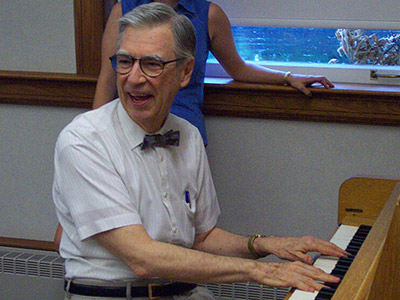