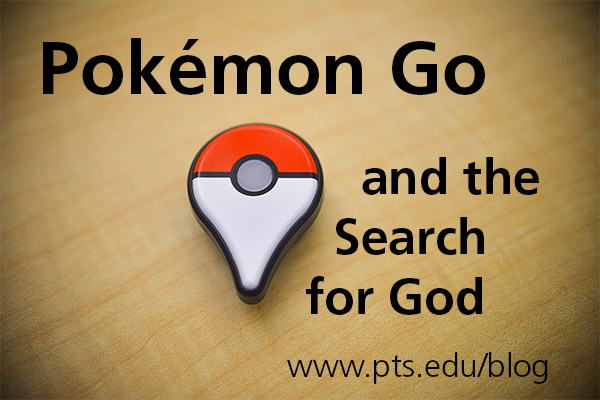 The World through a Game

Our 11-year-old son was desperate to play Pokémon Go, trying to download the app on his iPod, learning only later he needed a smartphone.

Mother to the rescue: curious herself and eager to see him happy, she got the app on her phone. Before long, they found themselves at Arsenal Park in downtown Pittsburgh staring at the phone, clueless what to do next.

Since Arsenal Park is a Poké Stop, a small band of aficionados was also there, enjoying pizza on what must be called a pokébreak. Eager to help a couple neophytes, these gamers explained how this is an “augmented reality” game and how you capture the Pokémon by tapping them when the phone shakes, then flinging balls at these Pokémon superimposed on the world you see through the screen. At the park my wife and child managed to capture a Diglet and secure an egg with a Squirtle inside.

While writing that last line felt like using a foreign language, I can already see how this scene—my wife, son, and six gamers roaming around a park, watching it through their phones, waiting for a cartoon animal to appear as an overlay—is quite a good image of how we humans actually live our real lives and read our world: through filters.

Reading the World through Filters

Thomas Merton once suggested that only a handful of people see the world as it really is. I think he’s right. The rest of us see the world through the overlays, the filters we carry within us. Some of them were preinstalled before we were born—the filter called sin, for instance, which causes us to see the world falsely, as if we stand at its center.

Other filters we have downloaded along the way: the filters of ideology; the filters of our fantasies and fears, addictions and aversions; the filters of social constructions like race and social categories like class—all of which shape the way we perceive and misperceive reality.

When I see a colleague as a competitor, a student as a threat, or one of my children as an extension of myself, I am seeing them through a filter, not as they really are. And if I can’t see the world as it really is, then I certainly can’t do the thing most incumbent upon me, the one thing I was born to do: see the shimmer of God’s glory, God’s own presence, from within all that is.

The Place of Spiritual Practices

Somewhere, someone right now is writing a sermon or a blog post suggesting Pokémon Go as an analogy for the human search for God: faith is like the screen we look through to see God.

I had a colleague who used to say that we must become “detectives of divinity,” but this is not at all what he meant, for until we have our reality-distorting filters of sin and ego and ideology deconstructed, the gods we find along our way are only idols we capture to serve our own interests.

Christian spirituality is not something we add to our lives like an app to our phone to help us find God. Rather, spiritual practices are meant to help us stay available to the God who finds us, the only One whose mercy can dismantle our filters so we can increasingly see reality as it is. With our distorted lenses, we see the world in the illusory way we want to see it. By making ourselves available to God’s grace, we can become disillusioned. We stop seeing neighbors as competitors and love as a zero sum game.

We can stop seeing the world through the narrow screens of sin, ego, and ideology. And we can start seeing the world as it is—the playground of God’s Spirit and the theater of redemption, shining from the inside out with the glory of a hidden God.

Now, where’s my son? I need him to show me how to get that game on my phone.

4 thoughts on “Pokémon Go and the Search for God”