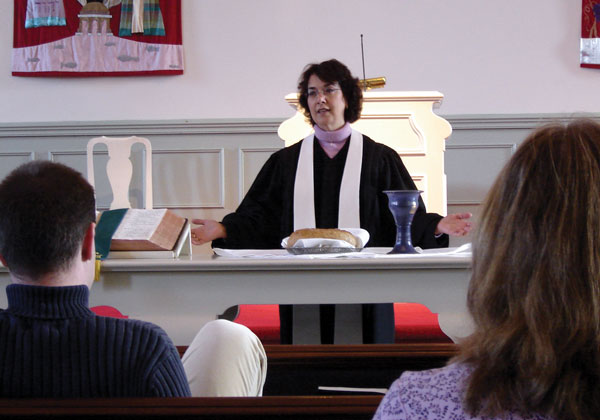 When I arrived at PTS, like many of my peers, I was questioning my call to ministry. After all, I didn’t really have any pastor role models who were female. So what made me think that I could, or should, feel that I was called to pastoral ministry?

Thankfully, I have had some wonderfully affirming experiences at PTS! The homiletics course called Women’s Preaching Traditions as well as my most recent experience helping to lead worship with an all women chapel team, are two of these experiences.

The Women’s Preaching Traditions class gave me the opportunity to realize that women had a history of responding to their call to bring forth the message of Jesus Christ throughout history, not just recently. My classmates and I saw that women were able to speak with authority because their message delivered the Gospel in a way that it could be heard by marginalized groups, by those who needed to hear the message in a different light, or by those who understood that the messenger was not the message. We wrestled through “Texts of Terror” passages from Scripture where women were shown to be victims of terror. We contemplated how these messages could speak to current situations, and we noted important differences that women bring to the delivery of these messages. I particularly loved the camaraderie that was evident in this class. We had a running phrase “Preach like a girl” which captured the heart of what we were learning and also empowered us in owning our pastoral identities as women.

Working with ordained female pastors (the Rev. Cathy Purves ’97 and the Rev. Kimberly van Driel) to plan and lead chapel services for the first week of Advent provided another perspective on women in ministry. One thing that I noted was that these female ministers took specific steps to consider how music and readings would impact the congregation. They were both interested in how the message would be received if the congregation was overwhelmed by the exhaustion of a difficult song for example. They helped us to think theologically as we made decisions about the various parts of worship. I especially appreciated how they took special care that the logistics were in place to ensure that the sacrament of the Lord’s Supper would care for all, including those with special dietary needs. The level of thought that went into planning showed a compassion for those they serve in their own congregations.

I know that there are still many places where women are discouraged to participate in ordained pastoral ministry, but I have also seen and participated in opportunities where women’s voices have added a new dimension to proclaiming the Gospel message. Praise be to God for these valuable experiences that encourage me and my female peers! In the words of both the male and female students of the Women’s Preaching Traditions class, it is a good thing to be able to … Preach like a girl!