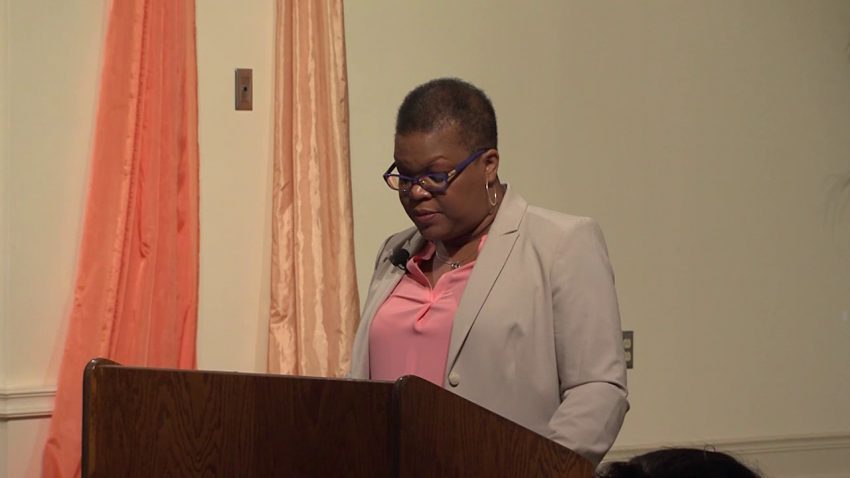 In early May 2018, Pittsburgh Theological Seminary hosted Dr. Chanequa Walker-Barnes who spoke on “Race, Gender and Imago Dei.” Following the event, the Rev.  Oghene’tega Swann, a Doctor of Ministry Urban Change focus student at Pittsburgh Seminary, shared her reflection. The following post has been edited for length; the original blog “Dark and Lovely: Is God In It? A Reflection on the 2018 Pittsburgh Theological Seminary Schaff Lectures on Race, Gender and the Imago Dei” can be accessed on the CBE-Voices of Color Chapter website.

Pittsburgh Theological Seminary has been a theological haven since I first discovered it four years ago while searching for the ‘right’ place and focus for my Doctor of Ministry program. Something very warm stirred in me as I encountered their commitment to creating and holding dedicated space for social justice issues and their commitment to diversity and inclusion. I almost yelled “hallelujah!” when on my first day on campus, I ran into three people of color faculty members, who were not just men of color, but also women of color. A Black woman was head of the Metro-Urban Institute, a Black man was one of the Deans, two Black men headed two departments, a Black woman (ooh, I was so excited to sit it on her class – c’mon now!) and an Asian man were theology and church history professors respectively….

Long before my program would start, I’d sign up for credit course work in Environmental Justice and sit on a Black Women in Theology class. I would attend these classes that were like water in a thirsty land, and leave in an all time high as professors, White and Black, demonstrated their awareness and commitment to social justice issues as a Christian issue! I’d finally found a place that reconciled my faith with my commitment to social justice issues. I was home!

It was as though, like a good lover, the seminary wanted to keep the fires of our love burning hot by not slacking on that which I fell in love with. The seminary successfully ensconced its place in my heart with several periodic seminars every year, dedicated to social justice issues of gender and racial equality and which were often led by people of color. People who were concerned (and there are a lot) came from all over Pittsburgh and beyond for these events. I remember attending my first social justice event. I had just started reading the most fascinating and theologically sound book on racial equality and the Imago Dei by Willie James Jennings, The Christian Imagination: Theology and the Origins of Race, when I found out he would be the guest speaker at one of these seminars/conferences. It was on! Come hail or high water, I would be there and I was!

Pittsburgh Theological Seminary has done a marvelous job of demonstrating what matters to God’s heart to its surrounding community, as it has faithfully served as the center for healing and reconciliation by providing resources and space for learning about and becoming equipped to tackle social justice issues for the entire community. These programs, which are open to the public, draw a wide audience from all spheres of life–secular and religious–and unites them in one purpose: to learn to love and practice justice and show mercy.

This year’s Schaff Lectures was no different. People came from far and wide to hear Dr. Chanequa Walker-Barnes speak on “Race, Gender and Imago Dei.” This was a must-attend for me, as I’d been enthralled since day one of reading Dr. Walker-Barnes’ book Too Heavy a Yoke: Black Women and the Burden of Strength about five years ago.

The first day at PTS, Dr. Walker-Barnes spoke about “Until All of Us Are Free: How Racial Reconciliation Fails Black Women” and “Tell the Storm I’m New: What Real Reconciliation Looks Like.”

Using Alice Walker’s The Color Purple as the lens through which she wanted the audience to envision the struggle of Black women, Dr. Walker-Barnes helped us identify how talks of racial reconciliation still leaves out justice for Black women. In a message that I have paraphrased, she showed us how in a world that treasures male and  White skin, Black women still can’t win. She went on to delineate how what we typically wrap up as reconciliation talks really further marginalizes Black women. And the crowning point of her message (for me): was the message that a Black woman’s equality comes from her own wrestling and confronting the injustices she experiences; her equality is not something that’s handed to her from the outside, rather it’s something she takes on her own. She realizes she is inherently worthy and she claims her space and place in society – on her own terms. Too often, the costly Band-aid approach to racial reconciliation eliminates Black women’s space and place because it does not allow the Black woman to present her self-realized self to the world. Instead, it’s the world still trying to define her place for her. Finally, she let us know that reconciliation is a journey. It’s not something you accomplish just by sitting at the table. Dominant people groups have to take ownership for how their privilege comes at great cost to others. Just like Celie in The Color Purple, marginalized people groups and women of color have to be allowed to work through (not rushed) the effects of misogyny from all men and White women and after all this, the world needs to be ready to take women of color on her own terms!

These lectures were attended by Caucasian men and women, as well as men and women of color. Hard questions were asked by all, and even harder answers were given, but there was a true spirit of humility, repentance, and a willingness to hear and affirm the message. White and Black men genuinely wanted to know how they could do better. In addition to recommending educational material, Dr. Chanequa told them, “Stop demanding our silence and stand beside us in our demand for justice.”

The Lectures ended with her sermon in chapel “When Their Sin Makes Us Hate Our Skin.” The texts were excerpts of the Shunamite’s soliloquoy from Song of Solomon 1:5-6

Dark am I, yet lovely,
daughters of Jerusalem,
dark like the tents of Kedar,
like the tent curtains of Solomon.
Do not stare at me because I am dark,
because I am darkened by the sun.
My mother’s sons were angry with me
and made me take care of the vineyards;
my own vineyard I had to neglect.

Reiterating the age-old struggle of the theologians and the church to identify the place of Songs of Solomon in theology, yet used these two verses to show how society continues to shame women of color, particularly Black women. She showed how society still only affirms women of color the closer they approximate White beauty standards, but how the Shunamite’s affirmation of her dark skin, was in itself an act of resistance: “Dark am I,…lovely.”

I leave out the word in between “I” and “lovely” because of the focus Dr. Walker-Barnes drew to it. For example, the fact that many translations qualify the Shunamite’s loveliness as despite her ‘blackness,’ thereby, furthering the notion that Black is not an acceptable beauty standard. Yet, she says, that the Shunamite’s speech and affirmation of her dark skin, was her piéce de resistance: Dark am I and lovely.

Dr. Walker-Barnes treatise of the Shunamite’s standing up for herself and asserting her worthiness (before men of her own heritage and men and women of lighter-skinned heritage) as one equally created in God’s image, summarized and affirmed the growing movement of women of color to stand up for themselves and affirm their worthiness just as they are: dark skin, kinky hair, thick lips, etc.

The Shunamite woman stands in the canon and reminds us of both the age-old struggle to suppress Black women and other women of color and the righteous resistance such women must put forth: dark am I, and lovely.

Our blackness is not an apology. It is a declaration that we are made in God’s image.

I will always be grateful to Pittsburgh Theological Seminary for using its resources to amplify the voices of the marginalized, as I cannot recount the countless times this seminary has pulled together the secular and religious community to hear ‘hard truths.’ No flinching, tell it as it is,  and then let’s find a way forward truth. Through this service, PTS maintains a prophetic presence and witness in the city of Pittsburgh, as it has become a place that affirms and confronts the brokenness in our humanity and communities, and then models the posture of humility and repentance for the community. I love Pittsburgh Theological Seminary! Did I already say that??? Oh, well!