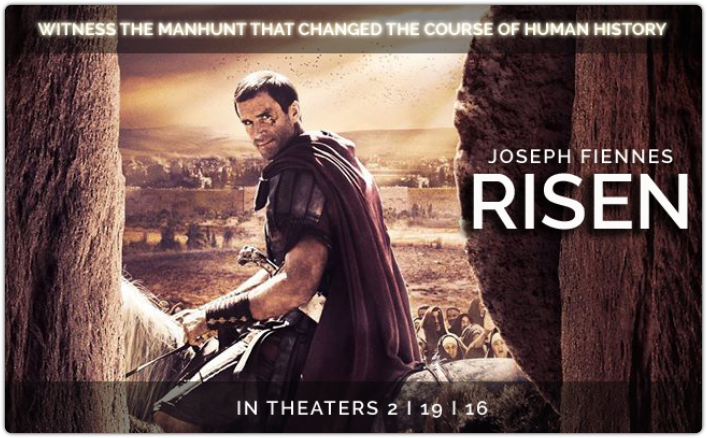 Spoiler Alert: I am going to share what happens in the movie Risen. None of these things will blow the movie for you, but you might want to see the movie first.

A couple of years ago I started a group at my church. We see a movie every month and afterward go to dinner and talk about the themes and underlying spiritual values of the movies. These discussions have been great opportunities to look at how life works, how God works, and how media presents those two things.

This past weekend we went to see the movie Risen and it led to some great discussion. Risen is the story of a Roman tribute named Clavius who comes back from a mission to Jerusalem to find a man named Yeshua being crucified. Pilate asks him, at the request of the Sanhedrin, to put guards at the tomb. When the body of Jesus is missing, Pilate calls on Clavius to find the body and calm the growing unrest among the Jews. This was a fascinating perspective! So many of the movies about Jesus end at the crucifixion and resurrection. This movie starts there. More than that, it is told from the Roman side as Clavius tries to sort out what happened.

During his investigation, Clavius interviews Joseph of Arimathea, Mary Magdalene, and Bartholomew among others. I assumed watching the movie that Clavius would find Jesus at the end. Instead, he finds Jesus about two thirds of the way through the movie. He ends up going with the disciples to Galilee, saving them along the way. He witnesses the miracle of the fish, the reinstating of Peter, the healing of a leper, and eventually the Ascension.

I will admit that I am not a big fan of Christian movies. They tend to be a little cheesy and sometimes more than a little low quality. This movie was well-done and well-acted. I found the first part of the movie about Clavius’ investigation to be interesting and compelling. I was partly put-off by the actor playing Jesus—Cliff Curtis. He was a drug dealer in Training Day, Fire Lord Ozai in The Last Air Bender, and the dad in the recent show Fear the Walking Dead. I simply could not buy him as Jesus. It got a little cheesier in the second part but was still very powerful.

A few things stood out to me in the movie. Jesus is called by the Hebrew Yeshua instead of being called Jesus. It was a good movie on the director’s part because it helped to dislocate this portrayal of Jesus from previous movies about Jesus. I think Jesus is a particularly hard character to put on film. He either comes across fully human or fully divine (almost robot-like). It is hard to get both but this film did a pretty good job. It brings up the interesting questions: What did Jesus look like? How did Jesus act with his disciples? Why doesn’t the Bible seem to care about these questions?

I thought the portrayal of the crucifixion was not as over-the-top brutal as it was in The Passion but was still powerful. It was also accurate to the research I have done on the Crucifixion. This movie was especially clear on crucifixion as death by asphyxiation and the purpose of breaking the legs.

There were also other portrayals of biblical events that made you think. The upper room was very small while I always pictured it as bigger. The movie also showed the Ascension more like Jesus walking off into the sunset instead of flying upward into the sky. This reframing of the Ascension may actually be more accurate to the text.

The movie was clearly written from a Catholic perspective. There is a strong emphasis of Peter’s leadership and Jesus passing authority to Peter. The movie also shows the Shroud of Turin—a burial cloth with the impression of a crucified face believed by some to be Jesus. (https://en.wikipedia.org/wiki/Shroud_of_Turin)

The most fascinating part of the movie is exploring these events from the perspective of a non-believer. The movie clearly relied on the arguments that NT Wright and others have put forth against the idea that Jesus had not really died (sometimes called the Swoon Theory) or that the body had been stolen.

I was very moved by the movie and it led to great discussions with my church people. I was again reminded that movies can be a powerful tool. I am glad to see that the overall quality and creativity of Christian movies are improving. I highly recommend Risen.

There was also a preview for a movie coming out in March about the childhood of Jesus called The Young Messiah. (Watch the trailer: https://youtu.be/UGzns9_KaWg.) The preview showed the struggle of Mary and Joseph raising Jesus. In one of the lines in the previews Joseph says to Mary, “How do we explain God to His own Son?” This looks like another interesting perspective into the life of Jesus. My suggestion is that you get a group from your church and go see the movie and then go to a coffee house or out to dinner (or cold beverages) and chat about it.