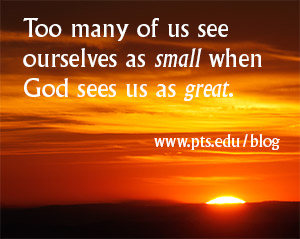 I’ve confessed a lot of sin in the last month. Not because I’ve committed more than usual, but because it’s been in Lent. I worship in chapel at least twice a week and at my church on Sunday mornings. That’s a lot of prayers of confession. I’m more aware than usual of the things I’ve done I ought not to have done, and the things I haven’t done which I ought to have done.

But there’s one sin these prayers haven’t prompted me to confess.

I was reminded of this sin during a conversation with my fifth-grade son. It’s a difficult age. The pressure to fit in and be accepted is great. He told me, in so many words, about his pain at wanting to be wanted by others. And it’s a very small step from feeling not wanted by others, to feeling not worth being wanted. The consequence? Self-rejection.

He didn’t need to tell me that last part. As a pastor, I’d seen it again and again, and I’ve felt it myself. As Henri Nouwen has said, “Self-rejection is the greatest enemy of the spiritual life.”

But when are we led to confess that sin? We are often prompted to confess the sin of pride, that supposedly ever-present over-estimation of our worth. Last week, one of those many prayers of confession had us admit that we “are misled by pride, for we see ourselves as great when we are small.”

Unfortunately, too many of us see ourselves as small when God sees us as great—created “a little lower than God” and crowned “with honor and glory,” as Psalm 8 tells us. The sin of self-rejection—the persistent under-valuing of ourselves—prevents us from delighting in God’s very delight in us.

“Self-rejection is the greatest enemy of the spiritual life because it contradicts the sacred voice that calls us the ‘Beloved.’ Being the Beloved expresses the core truth of our existence,” says Nouwen. He knew the damage of self-rejection from experience, as do more people than our prayers of confession would make us think. Lent would be a great time for the church to help us give voice to this sin, tutoring us out of this false view of ourselves.

During this Holy Week many of us will have the chance to sing the hymn, “What Wondrous Love Is This.” The last time I sang it, one verse struck me:

when I was sinking down beneath God’s righteous frown,

Christ laid aside his crown, for my soul.

Many souls are sinking down beneath this false-image of a frowning God. I increasingly believe that if God is frowning, it’s because we’ve been unable to see the smile of God’s delight. Christ laid aside his crown to free our souls from these false images of ourselves and of God, so that we might enter at last the joy of God’s joy in us.

Maybe next Lent (or maybe before then?) we’ll get to confess this overlooked sin. Maybe we’ll be invited to say something like this:

for not being able to see your delight in us,

for living lives misled by self-rejection,

and for persisting in the illusion that we are nothing.

Forgive us for treating ourselves and others as if that illusion were reality.

Cleanse our vision so that we can begin to see ourselves

as you see us—beloved children, the apple of your eye.

Set us free to enter into the joy you take in us,

a joy made flesh in Christ, through whom we pray. Amen.

The Rev. Dr. L. Roger Owens is associate professor of Christian spirituality and ministry at Pittsburgh Theological Seminary and teaches courses in the MDiv, Doctor of Ministry, and Continuing Education programs. Before coming to PTS he served urban and rural churches for eight years in North Carolina as co-pastor with his wife Ginger. He has written multiple books including The Shape of Participation: A Theology of Church Practices which was called “this decades best work in ecclesiology” by The Christian Century.