A Ministry of Education for President Lee

When the Rev. Dr. Asa J. Lee was inaugurated this month as the Seminary’s seventh president and as professor of theological formation for ministry, it represented the convergence of many threads of Asa’s sense of calling.

That call took many years to come together; when Asa first felt the nudge as a 13-year-old, he saw what pastors went through and thought, “There’s no way I’m going to do that.” So instead he focused on his passion for music, majoring in music education. This path promised opportunities for Asa to both perform and teach—but all the while, a calling to ministry was there like a buzzing in his ears.

A college job as a church musician bloomed into an opportunity to serve as a minister of music after graduation. This role, which he stepped into while also teaching music in public schools and private lessons, combined his love of music and his growing interest in pastoral ministry.

The buzz of calling was now a roar.

Eventually, Asa decided to pursue a seminary education. While in classes, he began to see music as the gateway that opened him to creativity and care—gifts he would now be able to use in his primary callings to pastoral ministry and education. And he would begin to amply explore these gifts and callings just after his seminary graduation, when he became both an executive church pastor and an adjunct professor of religion at a community college.

As much as Asa loved both of these roles, they remained two very separate parts of his life. While obtaining his Doctor of Ministry degree, he dreamed of a path where he would be able to combine these two vocations. That path—a ministry of education—eventually unfolded when he became the associate dean for community life, and then the vice president for campus administration, at a seminary. In these roles, he was able to minister to students by helping to shape their experiences with residency life, chapel, and food services.

But Asa wondered how else he might implement his unique vision for theological education—a vision focused on leveraging the best of the past in order to foster innovation for the future of the Church.

This is why we (and Asa!) are so excited for his installment as the Seminary’s next president. “My creative spirit is being so well-received at PTS,” Asa explains, “because that creativity is already here.”

Asa hopes to help the Seminary leverage its long history of shaping pastoral leaders and its many resources and programs. Doing so, he dreams, could increase our pastoral presence in the city, enabling us to be true neighbors to those in Pittsburgh and to equip those who are doing the hard work of ministry around the world. 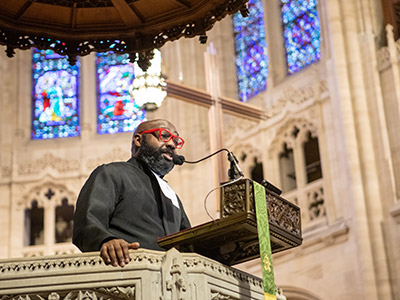