Sometimes God’s calling is to go. But sometimes, it's to stay. This was the case for recent M.Div. graduate Benjamin Phipps ’15 and his wife, Rachael.

They met while attending college at Malone University in Canton, Ohio. As the eve of college graduation was steadily approaching, they caught up with their good friend Lance Hershberger (a future PTS student) who told them about the World Christian Discipleship program through the Seminary’s World Mission Initiative. The couple enrolled in the program and lived in the East End of Pittsburgh for a year, learning what it means to be missional, developing rhythms of discipleship and devotion, and figuring out how to integrate it into their lives.

“When our time with the program was coming to an end, we knew we were supposed to stay in Pittsburgh. For whatever reason, God wanted us in this place,” says Ben.

So he enrolled in Seminary and took a part-time barista job in the nearby Waterworks shopping plaza. The WCD program taught that a job isn’t just about making a living it’s also a way to practice being Christian in a context that isn’t church. Through conversations Ben could see God working in the area and felt called to join in what God was doing in the community.

In seeking out a church for his field education requirement, Ben met the pastor of Faith United Methodist Church in Fox Chapel. The church was looking to be more incarnational in its neighboring community of Sharpsburg. This idea appealed to Ben and he spent his second year of seminary building relationships and discerning what God was up to there.

At the time, Faith United had just started a bi-monthly meal—The Neighborhood Table—that was open to anyone in the community. “I couldn’t articulate what I was called to do, but I knew God was calling me there. So I stayed.”

Ben and Rachael moved to Sharpsburg where he is now a part-time licensed local pastor appointed to Faith UMC, focusing on the community. With the help of a discernment team, he is exploring what a worshiping community might look like there.

As a sign to the community that the church is here to stay, Faith UMC committed to leasing a space in Sharpsburg, turning a store front into a ministry center—Roots of Faith. The space has been host to a variety of community events and services, from pro-bono law work to art shows.

Ben and Rachael are committed to the journey of discerning what God is up to in the community of Sharpsburg. 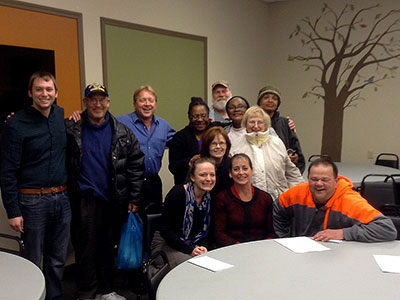