Pittsburgh Theological Seminary’s Board of Directors has granted emeritus status to three faculty members—The Rev. Drs. Ron Cole-Turner, David Esterline, and Steven Tuell, all of whom are retiring from PTS.

“These three are beyond deserving of their emeritus status,” said James Gockley, chair of the Seminary’s Board of Directors. “During their years here, they have formed students in the way of Jesus, contributed greatly to the guild, and built a legacy of community. For all these things and more, we’re grateful for their service and the Board voted unanimously and enthusiastically to grant these emeritus titles.”

Cole-Turner retires at the end of the 2021-2022 fall semester as the H. Parker Sharp Professor Emeritus of Theology and Ethics after serving as a member of the PTS faculty for 25 years. Cole-Turner received both his M.Div. and his Ph.D. in systematic theology from Princeton Theological Seminary, after receiving a B.A. in literature from Wheaton College. He is an ordained minister of the United Church of Christ, a founding member of the International Society for Science and Religion (currently serving as vice president), and has served on the advisory board of the John Templeton Foundation and the Metanexus Institute. Cole-Turner has written or edited eight books, including The End of Adam and Eve: Theology and the Science of Human Origins (TheologyPlus, 2016), a study of human evolution and its theological significance. He is also the author of the popular baptism hymn, “Child of Blessing, Child of Promise.”

Esterline began his roles as president and professor at PTS in 2015. He holds degrees from the University of California, Oxford University, and the Graduate Theological Union (Ph.D.) in Berkeley, Calif. Before coming to Pittsburgh, he served for 18 years at McCormick Theological Seminary—for 10 years as dean of the faculty and vice president for academic affairs and then as professor of cross-cultural education and ministry. He earlier served as mission co-worker with the Presbyterian Church (U.S.A.), first at the Theological College of the Presbyterian Church in Cameroon and then as academic dean and Lecturer at Pacific Theological College in Suva, Fiji Islands. Dr. Esterline currently serves as chair of the Executive Committee of the Global Forum of Theological Educators and on the Executive Committee of the Board of the Foundation for Theological Education in South East Asia. He is a minister member of Pittsburgh Presbytery, Presbyterian Church (U.S.A.). Upon his retirement in June 2021, he became president emeritus and professor emeritus of cross-cultural theological education.

Tuell retires as the James A. Kelso Professor Emeritus of Hebrew and Old Testament; he began teaching at PTS in 2005. Tuell earned his Ph.D. in Hebrew Bible at Union Theological Seminary in Virginia after studying at West Virginia Wesleyan College (B.A.) and Princeton Theological Seminary (M.Div.). He has written numerous articles and book reviews, including multiple entries in Feasting on the Word (a commentary on the Common Lectionary published by Westminster John Knox). He has also contributed to the United Methodist Publishing House Adult Bible Studies curriculum and Bible Reader series. An ordained elder in The United Methodist Church, Tuell has served churches in Pennsylvania, New Jersey, West Virginia, and Virginia. He is a member in full connection of the Western Pennsylvania Conference of The United Methodist Church, and preaches and teaches frequently throughout the area. 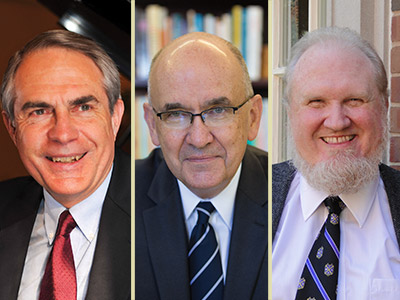