Dr. Dan Frayer-Griggs ’08, who has been teaching at PTS since 2018, is now serving as visiting assistant professor of Bible. Our Seminary community is so grateful that Dan, who is also a writing specialist in the Center for Writing and Learning Support, is now teaching and supporting our students full-time.

The two parts of Dr. Frayer-Griggs’ role here reflect his two academic passions that have been intertwined since he was an undergraduate student: religion and English. After growing up as a part of the Reformed Church in America, Dr. Frayer-Griggs studied these two subjects at Hope College. It was a senior project there that refined Dr. Frayer-Griggs’ interests. The new focus emerged during a cultural immersion trip to India, during which Dr. Frayer-Griggs and his classmates visited several Hindu, Buddhist, Muslim, and Sikh religious sites. He realized these encounters with religious pluralism were raising many important questions regarding his beliefs about Jesus.

Dr. Frayer-Griggs wondered what the Bible had to say, and so began his desire to learn the historical-critical approach to the New Testament. This method of studying the Bible emphasizes “the world behind the text,” the historical context in which the books and letters were first written. It also seeks to reveal what we can actually know about Jesus as a historical figure.

This quest was placed on the backburner while he obtained graduate degrees in English and education. But in 2006, he and his wife moved to Pittsburgh, and he began his seminary studies at PTS.

Since obtaining his Ph.D. from Durham University in 2013, Dr. Frayer-Griggs has been on a whirlwind teaching tour in the Pittsburgh area! He has taught at CCAC, Carlow, University of Pittsburgh, and Duquesne. His courses have covered a wide range of subjects—from English to the Bible to world religions. At the Seminary, his courses have focused on Greek and exegesis (i.e. critical interpretation of the biblical texts).

While Dr. Frayer-Griggs has found each teaching opportunity rewarding, he says that there is something special about his work at PTS. “I have loved teaching the students here,” he explains. “They are so passionate, interested, and engaged. It brings me joy to teach people who are so invested!”

This semester, Dr. Frayer-Griggs will be teaching a course on Old Testament exegesis and leading a research methods seminar for students in the Master of Theological Studies program. In the spring, he will teach New Testament exegesis, along with an elective course. While the elective topic has not yet been decided, Dr. Frayer-Griggs’s current research interests include the New Testament healing narratives, and particularly how they relate to current work in disability studies. 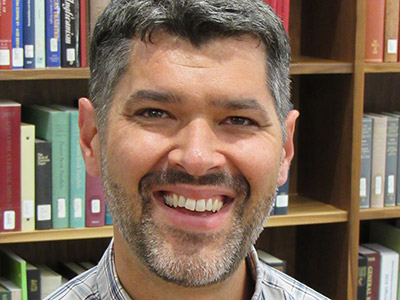