Senior M.Div. student Dave Lettrich says his call came late in life. “My relationship with God changed when I was 42, just four years ago. It was then that I decided to commit my life to serving God.” Since that time, Dave has been on “a focused journey of discernment which has now begun to have some clarity and direction.”

Dave was born, raised, and still resides in his hometown about 30 miles east of Pittsburgh—in the house he and his older brother grew up in. Raised Lutheran but educated in Catholic elementary, undergraduate, and graduate schools, he “always had a set of spiritual beliefs but felt somewhere between Catholic and Lutheran” and only recently got involved in church ministries. “Though in school I studied a lot about religion, for most of my life I was a ‘none’ who didn’t relate more to one church than another.”

With undergraduate and graduate degrees in business, Dave spent the majority of his adult life in that field. But more recently he’s been focused on finding a ministry to fit as a vocation. “For several years now, I’ve been an intern at Pittsburgh’s Hot Metal Bridge Faith Community. I’ve also been fortunate to have a seat on the board at 8th Avenue Place Ministry. Through both opportunities I’ve found a calling to people experiencing social and economic challenges, homelessness, and addiction.”

Most recently Dave founded BRIDGE TO THE MOUNTAINS a 501(c)(3) nonprofit aimed at reaching Pittsburgh’s homeless population. “We take people living on the streets of Pittsburgh on day trips to the mountains and provide them with experiences such as white-water rafting, trail biking, hiking, rock climbing, and adventure courses. We find this change in environment, away from the daily struggles found in the city streets, to be instrumental in creating opportunities for hope in the hearts of those to whom we minister.”

How did Dave’s refocusing happen? “Between 2013, not long after my mother’s passing, and March of 2015, when I started at PTS, I found myself reading everything I could find about God, theology, and the church. I read about 60 books in that year and a half. I would land on an author and read as much of that author’s work as I could, while looking for clues as to who or what influenced him or her so I would know where to go next. I started with Eric Metaxas, who turned me on to C. S. Lewis and Bonhoeffer, who turned me on to Barth. I read contemporaries such as Platt, Idleman, and Batterson—Richard Rohr, Brennan Manning, and Thomas Merton. I read Augustin, à Kempis, Aquinas. Eventually I was running out of direction for more books, so I literally looked at my library and realized God must be calling me to seminary. (That I’d purchased the entire collection of Karl Barth’s Church Dogmatics was a pretty good indicator.) It was just that simple. I said to myself, ‘Well I guess it’s time to go to seminary.’ I Googled it, and PTS came up first. So I called Admissions, toured the school, saw Barth’s writing desk in Barbour Library, and thought ‘Yep—this is the place.’”

“PTS—the place and people—is an amazing spiritually rich environment,” says Dave. “For me it has been an oasis for learning more about God, theology, and the church in a space that has allowed me the time to work through my personal discernment.” In that process, has Dave had a favorite biblical figure? “I’d have to say Elisha—I relate to the call.” 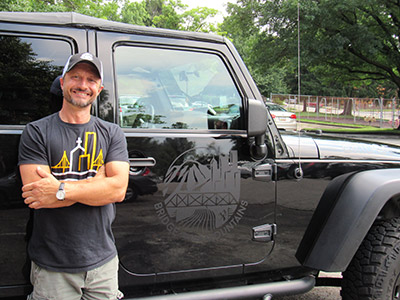