The call to ordained ministry can involve many twists and turns. As an ordained minister of the Word and Sacrament, Don Carol Simpson, D.Min. ’15 had his own thoughts and expectations of how his ministry would be shaped. Having received a master of divinity in 2006 in South Carolina, he was soon ordained at a church there.

But “after a short and turbulent stint as head of staff, I decided to leave that congregation. The painful experience led my wife to ask that I never take another call,” Don notes. Instead, they spent the summer of 2008 in the wilderness of Alaska. “For 92 days we stayed in rustic cabins or in the back of our Ford Explorer with no running water, no electricity, and no bathroom,” says Don.

While pondering how he would continue to serve the Lord if he didn't take a call to another church, Don caught sight of a vision—one of painting a picture for each chapter of the Bible. “If five years, 50 years, of 500 years from now anyone sees one of these paintings and seeks Christ as a result,” thought Don, “my ministry would be a success.” So that’s the vision Don decided to pursue, never mind that he has no formal training as a painter.

Don’s paintings are primarily intended for those who don’t yet know Christ. “I decided to use oil paint on a 16 x 20 inch canvas and include a one-page interpretation for each chapter,” he explains. “I study a chapter to get a sense of the meaning and the application for us today. Then I start with a crude sketch.” 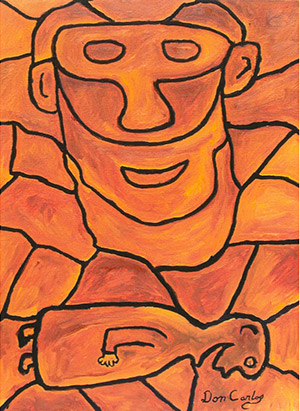 The styles of Don’s paintings vary from surrealism, impressionism, cubism, and realism to the abstract. “These styles can shift quickly and vary from chapter to chapter within the same book,” he notes. “An art critic viewed several of my paintings in late 2009 with the comment that I should drop the use of biblical content.” The professional critique could have crushed his desire or turned him in a different direction. Instead, he has persevered.

In early 2011, and with his wife’s blessing, Don began serving Christ as stated supply in a small church congregation while he continued to paint. Two years later he enrolled in Pittsburgh Theological Seminary’s Doctor of Ministry program. “It was here that my peers accepted and appreciated my paintings and my purpose for this ministry,” Don says.

“Perhaps my art will become an evangelistic tool for the unchurched,” Don reflects. “I may never be able to sell a single painting, but selling them has never been my purpose. That so-called ‘success’ is irrelevant. I am simply following the Lord, persevering in the task he has given me.” After Don finishes the 1189 paintings, he says he’ll put down the paint brush for good. “This task will then be complete.”

Painting: From chapters of the Bible suite Genesis 17, "Abraham Laughed at God." Oil on canvas, 2012 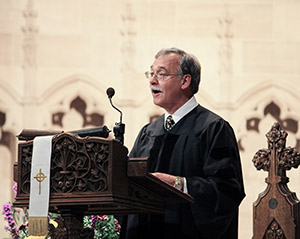