There are many roads to seminary. For recent graduate Jon Mathieu ‘21, the journey was a challenging one.

Jon had served for five years as a campus minister and six more as a staff member, elder, and ordinand at a large church. But as Jon entered into meaningful relationships with people who were different from him—feminists, Black people, and members of the LGBTQ community—many of his long-held values and beliefs didn’t seem to fit anymore. And so, while still serving in the church that had been his home for more than 10 years, he began the seismic faith processes sometimes called “deconstruction” and “reconstruction.”

Two truths were clear to Jon at this critical juncture: he could not navigate these processes alone, and he could not remain in his church context long-term. So Jon searched for communities and resources that could aid him in his journey, and God led him to the Faith & Justice Network (formerly the Newbigin House of Studies). He was accepted to the nine-month fellowship designed to pursue “a more beautiful, diverse, expansive, and liberating vision of Christian faith in the world.” At the time, the fellowship had exactly four seminary partnerships—and one of them was Pittsburgh Theological Seminary, less than a mile from Jon’s apartment.

Before he knew it, he was enrolled full-time in the M.Div. program. His first year was a lot to juggle, between his seminary studies, the fellowship, and winding down his role at the church. “It was exactly what I needed,” Jon notes.

“At PTS, I was introduced to perspectives and practices from across a broad ecumenical spectrum. In my Faith & Justice fellowship, I was in a cohort of 17 leaders—and I was the only straight man. The entire year was an exercise in decentering the white, male, Eurocentric theology I had come to accept as ‘normal.’”

As Jon neared the end of his M.Div. studies, this new trajectory of expansive and liberating faith began to take concrete shape. He had been leading a small faith community of “ex-vangelicals” in Pittsburgh, and the community began meeting on Zoom during the COVID-19 pandemic. They soon realized that their online home allowed them to welcome in people from all over the country who were also stepping away from their harmful and dehumanizing church contexts.

With new faces and voices joining their online community from West Virginia and Ohio, then New York and Texas and Canada, the group discerned that their ministry was meeting a pressing and glaring need. And so, incorporating as a non-profit, they formed Harbor Online Community. Jon now works as Harbor’s pastor, facilitating its weekly discussion and helping its members reimagine what it means to follow Jesus, be a church, and build community.

“At Harbor, belonging is really simple,” Jon explains. “If you want to belong, you belong.” 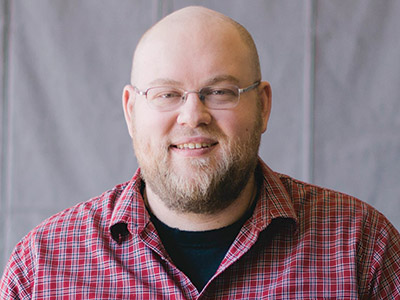