In September 2016, the Rev. Dr. Linda Morgan-Clement ’05 moved to Appleton, Wis., to become the first Julie Esch Hurvis Dean of Spiritual and Religious Life at Lawrence University after serving for 20 years as the first chaplain and director of interfaith campus ministry at The College of Wooster in Ohio. Her new leadership position is dedicated to reinforcing a welcoming and supportive community environment for spiritual expression.

“When I visited Lawrence,” says Linda, “I was very excited and energized by the opportunity to collaborate with the folks I met during the interview process. There seemed to be a can-do culture.” Having begun a similar program at Wooster, Linda recognizes that “to create something new is pretty unusual in a lifetime. To be able to do that twice in a lifetime is an amazing opportunity.”

Born in Hong Kong, Linda was adopted by an American family whose father was a Presbyterian minister. She spent most of her formative years living in Wisconsin until she graduated from Carroll University in 1980. After earning her M.Div. from McCormick Theological Seminary in Chicago, she began working for the Presbytery of Milwaukee, where she organized the congregation for the Stony Hills Presbyterian Church in Germantown, served as an associate pastor of the Brookfield Presbyterian Church, and spent eight years as one of several associate executives of the Presbyterian Church’s Synod of the Northeast in Syracuse, N.Y., before accepting her position at Wooster. Meantime Linda earned her Doctor of Ministry degree from Pittsburgh Theological Seminary in 2005.

Linda’s caring and contemplative personality caught the attention of her now-colleagues at Lawrence.

“Collectively, we thought Linda would be someone who can address the spiritual questions of everyone on campus—students, faculty, and staff—but also encourage those who are traditionally religious and who don’t feel they have a home,” said one of her interviewers. “She talked about ‘brave spaces’ where people with different outlooks and from different traditions could learn to hear each other and interact with each other.”

As a member of the university’s senior staff, Linda serves as the face and voice of religious and spiritual life at Lawrence. She provides spiritual leadership and connects the Lawrence community through campus ceremonies and religious traditions, services, and celebrations. She also oversees the Volunteer and Community Service Center.

“I hope to reach everyone in some way, regardless of their religious or spiritual background,” says Linda. “And I’m excited that the position is connected with service. My vision is to help people shift from being human doers, with a focus on résumé creation and what we do that defines us, to human beings, with a focus on the large questions of purpose, meaning, and growth and relationship with others. I think we learn how to engage these big questions and relationships best through experience and service.”

Linda sees the role of spiritual advisor as becoming increasingly important on college campuses today as the members represent a widening diversity in beliefs, socioeconomic status, race, world views, and cultural backgrounds. “It’s critical that higher education, which talks about holistic education, represents this conversation because it’s so misunderstood,” she says. “My role of encouraging staff, faculty, and students at Lawrence to wrestle with the questions of meaning and purpose is an important component of the kaleidoscope of creating a learning community.” 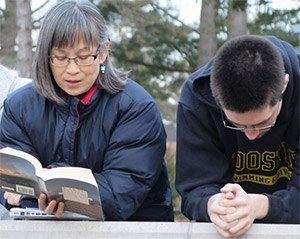