“I always want to see growth, to get better at what I’m doing,” says Nate Pennybaker, senior pastor of Triedstone Baptist Church in Pittsburgh—and Master of Arts in Pastoral Studies student at Pittsburgh Theological Seminary. Although Nate, along with his wife, the Rev. Terri Lynn Pennybaker, has pastored the church for 15 years come March, he enrolled at Pittsburgh Seminary to serve his church at an even higher level.

“I realized that I could not take my church further without having more to give to the congregation,” he notes.

An alumnus of Geneva College, Nate determined that graduate studies at Pittsburgh Seminary would prepare him to do just that. Because of his years of experience, and since his Baptist denomination does not require him to earn a master of divinity for ordination or pastoral service, PTS’s two-year MAPS degree program fit Nate’s educational goals well.

But pastoring is just one aspect of Nate’s professional life. He’s also a now-retired city bus driver—a career that did not require Nate to exercise the academic writing skills he used in college. And “writing theologically is different from other kinds of writing,” he says. “You have to learn how to do it. The Seminary’s relatively new Writing Center has helped me greatly in developing my skills in this area.” A regular, weekly attender at the Center, Nate describes it as “a place that is focused on student progress,” and he says his improved course grades evidence the truth of that statement. “No matter where you are in your writing, you can always get better at it!”

Because Nate’s learning in and outside the classroom at PTS has so significantly benefited his pastoral ministry, Terri Lynn also decided to enroll in the MAPS program. The Pennybakers’ gaining of graduate theological education as a couple is expanding their effectiveness as a ministerial team at Triedstone and in the surrounding community. 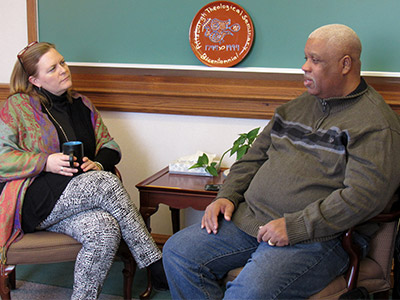