Confronting Racism and Working for Justice

In May 2020, Ralph Lowe—an MDiv student at Pittsburgh Theological Seminary—began to write an article for a Presbyterian news outlet. He does not remember what the article was supposed to be about, because as he was preparing it, he heard the news of George Floyd’s public and violent death. He saw the video of Floyd, a Black man, being killed by a white police officer.

Ralph found safe people and contexts at the Seminary, like his close friend and classmate Rebecca Young and his ethics class with the Rev. Dr. Ron Cole-Turner, where he could vent, process, and discuss his feelings. He quickly came to what would be an important conclusion: it was time to write a different article.

Ralph penned a piece addressed to his “dear white siblings in Christ,” a piece that urged white Christians to “get involved in Black life. Assume racism is everywhere, every day. Support the leadership of people of color. Talk to your children about racism. Understand and learn the history of racism and how it has evolved over time.”

Ralph’s colleague Brian Wallace ’06, an associate minister for the Pittsburgh Presbytery, had already called Ralph in the wake of Floyd’s murder to ask him how he was doing. Now, reading Ralph’s bold call for white Christians to invest in learning about race and the experience of Black people, Brian wondered—how will predominantly white churches do this? What about churches that are 100 percent white? So Brian proposed a new idea to Ralph: let’s make a video about race.

“At first, I was hesitant,” Ralph recalls. “Do I want to be that voice? Is it my place to decide what white people need?” But Brian, who is white, envisioned a partnership in which the two men would both discuss their experiences, and Brian would be honest about his own ignorance and desire to learn to be anti-racist.

Ralph made the video with Brian and, though the pair didn’t know it at the time, the Awareness & Transformation podcast was born.

After the first video, so many churches, pastors, and congregants voiced their gratitude that Ralph and Brian decided to create a series. In the first season of the podcast, they have covered many race-related topics, including Colin Kaepernick, white Christian nationalism, and Ralph’s own complicated relationship with police officers. After six episodes in 2020, the second season is now underway.

Ralph graduates this year and now serves as the director of Justice Ministries for the Pittsburgh Presbytery (PCUSA). He is grateful that PTS has prepared him for this important work—in the classroom, he learned to view racism as a fear-based sin, a framework that allows him to help people draw upon the resources of the Christian faith to confront their own racism and work for justice.

Just as in real life, talking about racism on a podcast is hard work that takes real love. Thankfully, Ralph has real love for his co-host Brian—and for his audience. 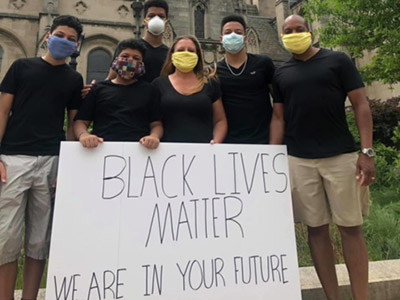