The Rev. Dr. Ron Cole-Turner, H. Parker Sharp Professor of Theology and Ethics, is retiring after 25 years at Pittsburgh Theological Seminary. The Seminary community is grateful for all the ways that Cole-Turner’s scholarship, wisdom, and humility have helped shape our institution and its students.

“Dr. Ron Cole-Turner has made incredible contributions to the Pittsburgh Seminary community for many years through his mentorship of students, his scholarship, and his teaching. While my time here has barely overlapped with his, I feel immensely grateful for his decades of faithful work,” said PTS President the Rev. Dr. Asa Lee.

Cole-Turner received both his M.Div. and his Ph.D. in systematic theology from Princeton Theological Seminary, after receiving a B.A. in literature from Wheaton College. He is an ordained minister of the United Church of Christ, a founding member of the International Society for Science and Religion, and has served on the advisory board of the John Templeton Foundation and the Metanexus Institute. Cole-Turner has written or edited eight books, including The End of Adam and Eve: Theology and the Science of Human Origins (TheologyPlus, 2016), a study of human evolution and its theological significance. He is also the author of the popular baptism hymn, “Child of Blessing, Child of Promise.”

In his final 15 years at PTS, Cole-Turner focused his scholarship on one overarching question: can Christianity offer a story of humanity, from its origins to its destiny? A story that is faithful not only to the Christian tradition, but to evolutionary science and cutting-edge technologies that point to our future? This was uncharted territory not only for Cole-Turner, but for the entire field of theology, for it required such acute and detailed knowledge of science.

“Confronting the arc of humanity theologically has increased, not diminished, my conviction of the enduring validity of the claims of creedal orthodoxy,” he explains. “It is a profound and haunting question, for which the Incarnation into evolving humanity provides a daring answer.”

Cole-Turner had the opportunity to explore this question and answer with a group of students during his final semester teaching in the fall of 2020. He led a seminar-style class called Humanity in a Scientific Age. Earlier this year, the Board of Directors granted him emeritus status. His time at the Seminary then concluded with a sabbatical, partially in California, where he researched religious experience. This work has already led to a public lecture and a published article, with more publications on the way.

As he turns to his next phase of scholarship and ministry, he will do so with the gratitude and support of Pittsburgh Theological Seminary. 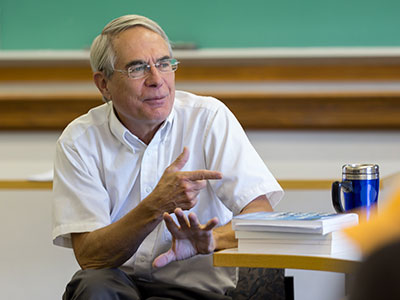