May 31, 2020, marks the retirement from teaching of Dr. Ron E. Tappy, G. Albert Shoemaker Professor of Bible and Archaeology since 1997 and project director of The Zeitah Excavations, launched in 1998. But don’t be surprised if you still see Dr. Tappy on campus—though he won’t be teaching, he will be working on publishing the multivolume final report from this most recent of PTS-sponsored archaeological field projects.

With a master’s and Ph.D. in Near Eastern languages and civilizations from Harvard University (where he earned a Giles Whiting Dissertation Fellowship and graduated “with distinction”), Dr. Tappy came to Pittsburgh Seminary after having taught at Westmont College (Santa Barbara, Calif.) and the University of Michigan. Awarded a research fellowship from The Pew Charitable Trusts in 1997, he spent his first year at PTS writing his second book on the archaeology of Samaria, capital of the northern kingdom of Israel. (His third book on Samaria was nominated for the G. Ernest Wright Award, given by the American Schools of Oriental Research.)

In the PTS classroom, students were quickly drawn to Dr. Tappy’s keen wit, story-telling style, and extensive knowledge—not only of the biblical world, but also of literature, nature, sociology, the arts, and more. A man “interested in everything,” he soon developed a reputation for high academic standards and personal attentiveness to his students’ concerns.

“From my first class with Dr. Tappy, I felt a kindred spirit with him and knew he’d be not only a great teacher but also a wonderful mentor—and he’s been both!” says M.Div. student Guy Brown.

Also as director of the Kelso Museum of Near Archaeology for two decades, Dr. Tappy has brought to campus more than 50 internationally respected experts from around the world to speak in the Museum’s annual lecture series. The talks have drawn an average audience of more than 100 people, largely from Pittsburgh’s Jewish community. In fact, Dr. Tappy made his very first trip to Pittsburgh at the invitation of a member of Rodef Shalom Congregation—the founding president of the Biblical Archaeology Society of Pittsburgh. As its guest lecturer, Dr. Tappy spoke in the auditorium of Hicks Memorial Chapel—two years before joining the faculty of PTS!

Over the years, Dr. Tappy has distributed numerous scholarships from the Seminary’s Jamieson-Trotter Endowment to help PTS students participate in field projects in the Middle East. Most of those students joined The Zeitah Excavations’ international team at Tel Zayit, Israel, for one or more of its nine dig seasons. Dr. Tappy directed their on-the-job excavation training, educational field trips “from Dan to Beersheba,” expansion of cultural awareness through personal interaction with Israelis and Palestinians, and credit-earning academic work, in addition to running the excavation during its on-site field and study seasons and analysis during the rest of the year at home.

You might think that authoring multiple scholarly books, delivering and publishing dozens of scholarly lectures and articles, directing an overseas archaeological field project, running a world-class lecture series, and teaching a full load of graduate-level courses—plus serving for 12 years on the board of Jerusalem’s prestigious Albright Institute of Archaeological Research—would limit Dr. Tappy’s time for service to the local church. But not so. He has taught hundreds of adult Sunday school classes in churches and synagogues from Pittsburgh to Paris and beyond. And he’s eager to continue giving adult education series in houses of worship as he completes his publication of The Zeitah Excavations and brings the project to a close. 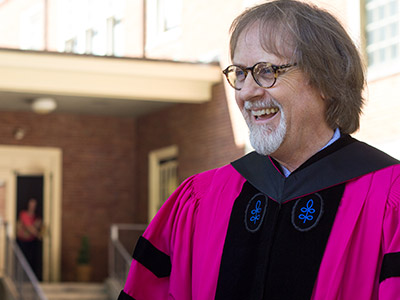