Artist, author, illustrator, and Tennessee resident Rubertha Taylor ’98 is focused on what matters most. In fact, “What Matters Most” is the title of the children’s book she published in 2018—her first!

As explained on the back cover, “Giving children permission to acknowledge and accept their importance on earth is the central focus of this book.” She adds, “And although its words are chosen to speak to a young audience, its powerful message extends to adults as well.”

Rubertha enrolled at PTS to begin obtaining the academic credentials needed to teach Hebrew Bible at the collegiate level. Having distinguished herself academically as a seminary student, upon graduation she received the Henry A. Riddle Award for Graduate Study—an award that eventually helped fund her doctoral work in Hebrew Bible at Texas Christian University. But before entering that program, immediately after graduating from PTS Rubertha began teaching in the field of biblical studies (Hebrew language, Old and New Testament, Christian thought and ethics, and more) at Lee University (Cleveland, Tenn.), where she further distinguished herself as a professor. Nominated by her students, she was soon recognized with an award as one of the best undergraduate teachers in America by being named to Who’s Who Among America’s Teachers in Colleges and Universities, “a surprise bestowed on me in 2006,” she recalls.

In the same year, Rubertha began her Ph.D. program at TCU, and that experience taught her something about herself. She explains, “While in this program, I realized that I did not want to continue spending a lot of time inside a classroom and/or doing research. So once I finished my course work in 2009, I decided I would try to figure out what I wanted to do with my life. It was during this process that I remembered what my childhood dreams were: writing and doing creative things. So I cut back on my teaching load, cut back on my cost of living, and began my pursuit of developing into that person God intended me to be.”

“During this time of reflection,” she continues, “I also remembered that the first verb in the Hebrew Bible is ‘create.’ The prominent placement of this verb in the biblical text continues to provide me with the strength and courage needed to visualize, develop, and present ideas and stories that will eventually take on a life of their own.”

Rubertha reflects further, “As children, we are so pure. We know exactly what we want, and we begin to pursue it. Then, unfortunately for most people, life happens, and we . . . forget about our dreams.” In her own life, Rubertha corrected that course: “For the past 10 years, I have written and developed my drawing skills—which, by the way, I didn’t even know I had!” She expanded her pursuit by meeting with her local school board to discuss book ideas for children and grew her dream from there.

Today, What Matters Most—published under Rubertha’s professional pen name, Tameka—is available through Amazon and Barnes and Noble. She embodies creative ministry to the core. 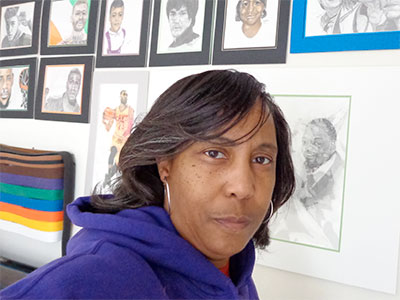