Seminary can prepare people for their future ministries in a lot of different ways. For 2016 M.Div. graduate Taylor Barner, one of the most profound growth experiences came when he served as the speaker at a youth retreat at the invitation of one of his classmates. Another fun fact: that classmate, Jason Freyer ’16, had served as Taylor’s own youth group director years earlier!

After his second talk at the retreat, Taylor offered an invitation for any of the students to feel free to chat with him during the rest of the weekend. One high schooler, “Sarah,” did not wait long; as soon as the talk was over, she approached him and asked him some follow-up questions about Jesus. She also shared about the immense pain of tragically losing her mother one month earlier.

In this important moment, Taylor’s classroom learning intersected with his ministry situation. He remembered the lessons from one of his PTS classes, Introduction to Caring Ministries. He reminded himself that the most important gift he could offer was his presence; listening is often better than speaking.

Taylor’s conversation was not only the most significant ministry he provided that weekend, but in some ways it marked a turning point in his own journey of vocational discernment. In the beginning of his seminary experience, he had struggled with inadequacy and doubt. It seemed like his classmates had such vast knowledge of the Bible and theology! But at the end of this weekend retreat, Jason affirmed Taylor’s gifts and ministry, and it reignited Taylor’s passion to work with young people. He was so grateful for Sarah’s courageous act of sharing.

This passion carried him directly into his current calling as an associate pastor for students and families at First Presbyterian Church in Burlington, N.C. In this role, Taylor works with middle schoolers, high schoolers, college students, and young adults—anyone age 12 to 35! But his greatest joy is still working with younger students.

“The most important thing in my ministry,” Taylor explains, “is to speak life and love, rather than doubt and discouragement, into their lives.”

And Taylor’s new friend Sarah? She reached out to him a year later to let him know how she was settling in at her university. She had found a loving church and joined a college ministry. Taylor is always happy to stay in touch with his youth group kids as they grow. “These lasting bonds are formed when you minister with vulnerability and care.” 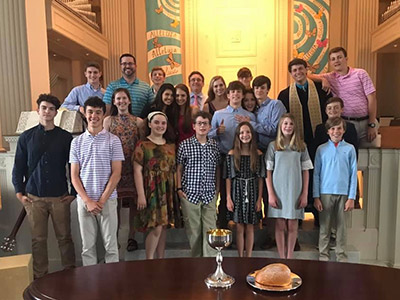