United Methodist minister the Rev. Timothy (Tim) Bowser ’07 was born and raised in Clarion County, Pa. At the age of 12, he became a member of Perryville UMC in Parker, Pa., and four years later began discerning a call to pastoral ministry. At the same time, his father received licensure and an appointment in the Western PA Conference of The United Methodist Church.

Tim went on to major in liberal studies and minor in history and psychology at Clarion University, then entered Pittsburgh Seminary to earn his M.Div. He had always felt called to serve others, and it was no surprise that he sought to become a pastor. For 15 years—both as a student and a commissioned pastor—he served in local churches and their communities, including Mars (Pa.) UMC and Valley Chapel UMC (Juneau, Pa.).

But from the start, Tim had sensed his call was to serve not only those in the church, but also those outside the local church. “So as a pastor, I always felt as though I should and could be doing more,” he reflects.

A couple of years ago, God began placing another call on Tim’s life, one that had been a lifelong dream for Tim. And on June 6, 2018, Tim reported to the Chaplain Basic Officer Leader Course at Fort Jackson, S.C., to train to become a U.S. Army Chaplain. He entered with rank of Captain (03) and was commissioned to Active Duty upon arrival at CHBOLC. After graduating three months later—to the date—he was stationed at Fort Bragg, N.C., where today he serves as an Army Battalion Chaplain of the 2nd Battalion, 319th Airborne Field Artillery Regiment, 2nd BCT, 82nd Airborne Division.

Tim comes from a long line of family members who have served in the U.S. military—in fact, both of his older brothers were born on Army installations. His deep respect and admiration for the men and women in the armed forces—and for their families—make his extraordinary yet humbling call from God a fulfilling ministry for Tim. He celebrates his journey to and in that ministry by noting, “PTS prepared me well to discern, follow, and serve in the role to which God has called me.” 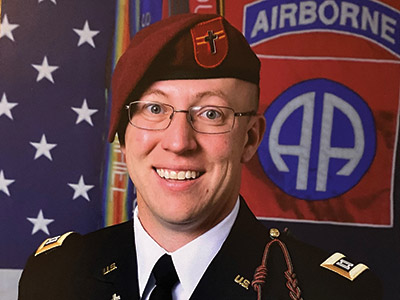