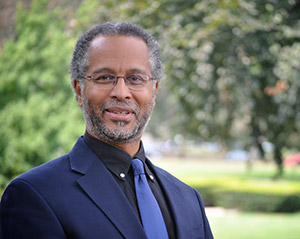 It’s hard to keep up with the highly accomplished, internationally active the Rev. Dr. R. Drew Smith, who became Pittsburgh Seminary’s professor of urban ministry last June. This summer he’ll lead the Transatlantic Roundtable on Religion and Race. The July 10-16 event, “Social Struggle and Faith-Based Activism in ‘Black Empowerment’ Times” will be held at the University of South Africa in Pretoria where Drew is the research fellow in the Department of Philosophy and Systematic Theology.

With multiple graduate degrees from Yale (including a doctorate in political science), Drew has received many honors and awards for his academic leadership, including selection in 2002 as an Emerging Leaders Fellow by a Duke University/University of Cape Town program on Leadership and Public Values, and selection in 2008 for an Indiana Governor’s Black Expo Leadership award. A diverse array of leadership activities has earned him such distinctions.

Both a social scientist and clergyman, Drew has initiated and directed multiple projects related to religion and public life, including the Public Influences of African-American Churches Project and the Faith Communities and Urban Families Project. In addition to gathering research data, the Projects have convened seminars, conferences, and roundtables that have brought clergy, policy makers, and community leaders together to discuss matters pertaining to the Church’s public mission and ministry. As a Baptist clergyman, he has ministered in a number of parish, prison, and campus ministry contexts.

Drew has also been actively involved in international community development and youth leadership development, initially as an executive staff person at Operation Crossroads Africa during the 1980s. He served in 2005 as a Fulbright Professor at the University of Pretoria in South Africa and in 2009 as a Fulbright Senior Specialist at Presbyterian Theological Seminary in Cameroon.

He has also lectured in many international venues, including in Israel as part of the U.S. State Department’s Speakers Bureau. Just during the past year, internationally he has co-convened conferences and presented papers with titles such as “Expanded Poverty, Church Ministry Distance, and Public Policy Evasions in the U.S.” (for The Church’s Community Role in Times of Austerity, University of London), and “Contemporary Responsiveness to Black Enslavement Past and Present: 150 Years After the Emancipation Proclamation” (for Black Churches and 21st Century Captivities, Ghana Institute of Management and Public Administration, Accra). His latest of five books is titled From Every Mountainside: Black Churches and Civil Rights Beyond the Southern Movement (SUNY, 2013).

Recently, Drew also led the workshop “Unearthing Global Power for Justice” at the Samuel DeWitt Proctor Conference in Dallas, Texas, and spoke on “Fostering Respect and Understanding Among Religions, Cultures, and Nations” at the World Congress of Religions in Washington, D.C. His other professional activities include conducting of dozens of urban ministry interviews on urban ministry innovators across the U.S. as part of a research grant from the Louisville Institute.

As a professor at Pittsburgh Seminary, Drew collaborates with Metro-Urban Institute director Kimberly Gonxhe on programs and activities relevant to global ministry in local and urban contexts.