Recently the Rev. Dr. Angela Hancock took center podium as one of four featured lecturers at the annual Karl Barth conference in the Netherlands. “The theme for this year’s conference was ‘Irregular Theology—and the Sermon: Karl Barth’s Homiletical Method,’” noted Angela, who serves as associate professor of homiletics and worship at PTS. Already with one published book on Barth’s preaching—Karl Barth’s Emergency Homiletic 1932-1933: A Summons to Prophetic Witness at the Dawn of the Third Reich (Eerdmans, 2013)—Angela was an obvious choice to serve in one of the conference’s featured-speaker roles. She drew on and expanded her research on the German Protestant church in the 1920s and 1930s in the paper she presented there.

“My lecture compared and contrasted Barth’s ‘emergency’ homiletic of 1932/33 with that of another ‘Word of God’ theologian from the period, University of Tübingen professor and popular preacher Karl Fezer,” she explains. “In spite of their shared conviction that preaching somehow bears witness to ‘the Word of God,’ the two scholars had very different reactions to the rise of National Socialism: Barth resisted it; Fezer embraced it. So in my paper I explored the theological reasons for this divergence, what we can learn from the contrast between Barth and Fezer, and the implications for faithful preaching in politically polarized contexts today.”

As a featured speaker, Angela stood in expert scholarly company at the “Karl-Barth-Tagung.” Her presentation followed that of Michael Beintker (emeritus professor of systematic theology, University of Münster), who spoke about Barth’s theological works of 1930-1933 in their context. After Angela’s talk, Rinse H. Reeling Brouwer (Miskotte/Breukelman Chair for Theological Hermeneutics of the Bible, Protestant Theological University, Amsterdam) explored the publications of “a Dutch kindred spirit of Barth’s”—K. H. Miscotte. Finally, Ciska Stark (assistant professor of liturgy and homiletics, Protestant Theological University, Amsterdam) focused on what Barth’s homiletical method can bring to the present day.

“Political and social crises are not limited to Karl Barth’s time and context,” Angela observes. “And his conviction that the wide horizon of God’s gracious way with humanity, as witnessed by the prophets and apostles, can call the ‘spirit of the times’ into question makes his theology a vital resource for preachers today.” 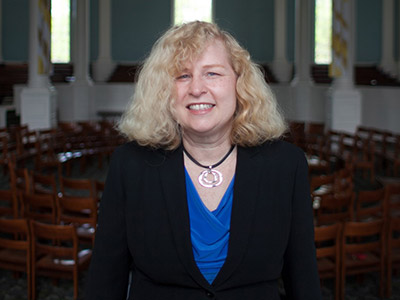