“The call on my life has always been to serve,” says Brenda Henry, M.Div. student at Pittsburgh Theological Seminary. Originally from the Virgin Islands, Brenda moved to attend school at Michigan State and graduated in 1992 with her undergraduate degree and a master’s in social work.

“When I was a young girl, there were two things that happened in my childhood that made me realize that people are judged by socio-economic status, people are judged by the color of their skin. In this case both of these instances were in health care and I decided that no one should be treated that way. I wanted to be a voice and advocate for others.”

Brenda eventually discovered she was more concerned with preventing injury than fixing the already caused injury which led her to study social work. Then in 2004, she and her family moved to Pittsburgh with the goal of her attending University of Pittsburgh to pursue further education in public health and social work. Amidst the decision making process, Brenda learned about the relationship with public health, social work, and the Seminary which intrigued her.

“I love what I do but what makes me able to what I do is that every day I have a reason to get up: God protects and takes care of me,” she says.

Yet as Brenda ventured down the social work and public health path, God had other plans. One thing after another happened and she realized God wanted her to focus on the faith component of her service. She did, by enrolling at PTS, but she had her reservations.

“For me ministry was always defined as being a pastor and that was terrifying,” Brenda says. “But when I realized that ministry is serving God, I was much more comfortable with that. I have been doing that in my social work world, which was my secular way of addressing this call on my life, and I am reaching a point where I can begin to identity that in a different way on a different level. My call has not changed—it has only been elevated.”

Brenda is continuing to follow where God is calling her to serve, seeking to not only be a voice for others but also a way through which God’s voice can speak into the lives of others. 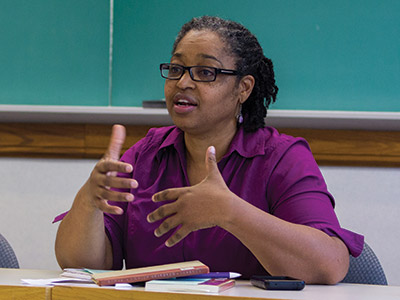