Nathan Leslie '10. To the residents of Bessemer, Pa., a local boy who grew up on a nearby dairy farm that has been in his family since 1815—and whom they now know as “The Rev.” Since his PTS days, when Bessemer PC called him as their student pastor, Nathan has been providing leadership for this congregation seeking revitalization. “I met the good people of BPC while in high school,” says Nathan—“a congregation that was sincerely trying to be faithful to God’s calling but was struggling to make that happen. When they were unable to afford a full-time pastor in 2006, one of their members suggested they pursue a student pastor who could step in and re-energize the church.” Nathan filled that role—and continued to fill it after graduation from seminary by unanimous vote of the congregation to install him as its Pastor.

When Nathan began his call as a student, he “had some theological training and experience in preaching, but I knew nothing about church revitalization or growth (or so I thought). That summer, I began a season of regular prayer and reading Scripture, along with the members of the session. The result was a transformation of lives, the church body, and our understanding of the church. Suddenly, we became a body of believers on a mission in our community. Suddenly, we no longer saw ourselves as a dying church, but now as a church that embodied the heart of the Gospel, a resurrection hope; we were a church emerging from near death by the power of the Holy Spirit. And from there, God has done some pretty amazing things.”

One of Nathan’s “greatest joys” in this calling has been helping to establish the Mohawk Coffee House (MoCo House) in Bessemer. “The purpose was to get Christians outside the walls of the church by creating a safe space to interact with our community, build relationships, and share the Gospel with others.” In the end, the result was a partnership of members from BPC and four other churches—MoCo House opened in December 2014. “It’s a regular part of life and ministry for me now,” notes Nathan. “If you catch me at the right time, you’ll find me working as a barista behind the counter. Other times, I’m just hanging out in what’s become my ‘mobile office’ armed with my cell phone and computer, but most of all, willing to chat, listen, and pray with those who stop by. After all, this is how I see Jesus ministering in his world, and ministry is, frankly, carrying on Jesus’ ministry. I see Jesus’ selfless service to and sacrifice for humanity and the hope that comes from his resurrection as markers for the attitudes and actions of ministry. So I like to be where people are, inside and outside the church, embodying Jesus Christ in the power of the Holy Spirit. So I’ve become something of a pastor to the community as well.” As testament to that relationship-building pastoral ministry, the MoCo-frequenting officers of the Bessemer Police Department have recently appointed Nathan as their chaplain.

But “under the collar” Nathan says he’s “a normal guy” who likes all kinds of music, loves trains, yard work, and football, and enjoys the outdoors—especially sitting around a fire with friends and family when the weather’s warm. A husband and a foster father of three boys under the age of five, Nathan truly makes his home among the people to whom he feels called to minister. 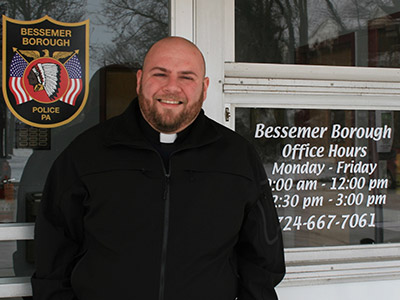