In 2011—the year Zac Morton received his M.Div. from Pittsburgh Theological Seminary—the leadership of Roswell Presbyterian Church, in northern Atlanta, Georgia, knew it was Roswell’s time to plant a church. After selecting a site in Suwanee, they formed a search committee in 2014 to call a pastor.

The Rev. Morton was by then content in his first call as associate pastor of First Presbyterian Church of Manhattan, Kansas. While attending a PC(USA) conference that year, he first started to consider church planting. “It had never been on my radar before, but there I learned about this cool thing called the Mustard Seed Project in Atlanta.”

Some months later, Zac logged in to the PC(USA)’s internet-based matching and referral system “to see what was out there in the church planting world.” He was soon matched with Roswell Presbyterian Church for its Mustard Seed Project. In October he was called and installed as associate pastor at Roswell with missional responsibility for The Mustard Seed Project.

What Zac is doing in Suwanee is ambitious. He’s reaching out to the “religious nones,” primarily by convening a Sunday morning hiking group and partnering missionally with a local children’s shelter. He also convenes a weekly dinner and discussion group at Everett’s Music Barn.

“My role at those meetings is first of all to facilitate the discussion,” says Morton. “I always try to bring in and bear witness to where either the example or life of Christ or the Christian tradition comes into that evening’s topic.”

People in the community learn about the hikes and dinner meetings primarily through an online network or personal invitation—from Zac, who volunteers at several community organizations, or a member of the project’s core group. Weekly, the hiking group averages between 20 and 30 people from ages 1 to 77. The Monday evening dinner and discussion group has an average attendance of 12-20.

“The hiking group gives me and our core group of people a natural, non-threatening way to forge relationships on a regular basis with people we’re inviting to reengage with their faith. When you’re in the suburbs, where else but the trail do you have the chance to connect and spend three hours with a stranger, and have a meaningful conversation that’s not awkward and weird?” notes Zac.

At the beginning of every hike, the group circles up, exchanges names, and responds to an icebreaker question. Then Morton tells them the hike is sponsored by The Mustard Seed Project and distributes cards with the new worshiping community’s contact information and a QR code.

As a result of that outreach, roughly 65 percent of the people who attend the Monday evening discussion come from the hiking group; the others are mainly people that Zac or core group members have met at different venues in the community. In just nine months after The Mustard Seed Project began, the group celebrated its first worship services—Christmas Eve and Easter.

Zac continues to be gratified by seeing people connect with God in new ways. “We had one guy who hadn’t prayed out loud in ten years, and he’s been leading prayer at the end at our group time,” says Zac. “You’re tempted to say it’s little things like that which are exciting, but they’re not little at all—they’re actually huge. That’s what we’re here to do. That’s it.” 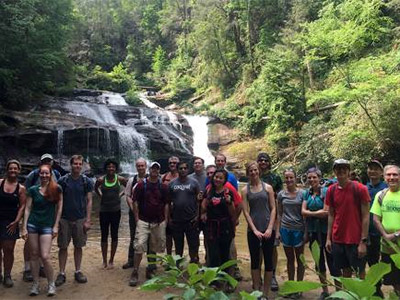