Director of Information Technology David Middleton received the Seminary’s 2020 Calian Award for Campus Community Service. The award honors an exemplary member of the Pittsburgh Theological Seminary community who demonstrates excellence in carrying out responsibilities and volunteer assignments and also expresses a caring spirit of good will and hope, essential in life together as a community.

In response to the COVID-19 pandemic and in a matter of just weeks, the Seminary shifted from in-person to online teaching and learning—“and that wouldn’t have happened without Dave’s extraordinary leadership and care,” said David Esterline, president and professor of cross-cultural theological education.

But while Dave deserves this award for that feat alone, he deserves it for much much more. First as junior network administrator and now as IT director, he’s ably served the Seminary community for the last 15 years and counting. During that time he’s served on committee after committee and led multiple initiatives, including implementing the OneCard system, 25Live, and all the behind-the-scenes database work to switch the academic calendar from terms to semesters.

“And he does it all with genuine patience and a quick wit,” said Esterline.

Middleton grew up in a small town called Watsontown, near Williamsport, Pa. He earned his bachelor’s in data communications and networking and a minor in business management from Pennsylvania College of Technology (a Penn State affiliate). More recently, he added his MBA in IT project management from Western Governors University.

With Dave’s credentials, skill, and easy collegiality, he could have found work virtually anywhere. But a decade and a half ago, he chose to serve at PTS. “I felt that the Seminary was large enough to provide me with opportunities to learn and gain experience in a variety of areas. It also offered me the opportunity to relocate to Pittsburgh—an important personal goal, as my girlfriend, who eventually became my wife, lived here!” he adds with a smile. Dave goes on to comment, “The Seminary has offered me tremendous opportunity to grow both personally and professionally in a variety of ways. PTS is truly a blessing.”

Outside the Seminary, Dave his family—wife Amy and 11-year-old son Zac—like to travel. Dad Dave is an active participant in his son’s Boy Scout Troop. And rounding out the family are two Pomeranians—Snowball and Peanut. In the wider professional world, Dave is president-elect of C-CUE, a regional association of colleges and universities committed to developing and expanding the appropriate use of computing and other information technologies in undergraduate education.

The Calian Award recognizes that all members of our community are important to the success of the Seminary. Dave Middleton has proven that point time and time again. 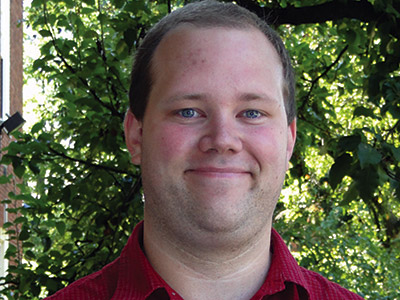