“This is the kind of position I dreamed about when going to seminary!” So says the Rev. Balajiedlang (Bala) Khyllep, Pittsburgh Seminary’s new associate director of the World Mission Initiative.

Originally from North East India but now serving as co-pastor of a small Presbyterian church in Britton, S.D., Bala is well aware of the challenges involved in relating world mission to the lives of local congregations. “I truly believe in the importance of the World Mission Initiative program for the preparation of seminarians and the purpose of the larger church,” he says.

Bala himself has served with many Christian mission endeavors in India and the United States, including the Missionaries of Charity in Kolkata (formerly Calcutta), an orphanage in Mumbai (formerly Bombay), a rural Christian hospital in central India, and an after-school tutoring program for at-risk youth in New Jersey. He has also served as a hospice chaplain in Ohio.

With heritage as a member of the Khasi—an indigenous Indian people group evangelized by Welsh Presbyterians in the mid-19th century—Bala brings a unique perspective to his position at PTS. “The Welsh Presbyterians gave me and my family a priceless gift, for which I give thanks to God; but these original missionaries also made some grave mistakes, such as requesting that instruments and traditional music be packed away and treating most of our cultural traditions as primitive. I know firsthand the cost of serving a people but not respecting their culture.” This history fostered in Bala a keen awareness of the importance of communicating well cross-culturally—and he has honed his skills in this area. “I have spent most of my life working with people from a different culture than my own,” he notes.

After earning his bachelor’s in botany and bachelor of divinity (equivalent to an M.Div.) in India, Bala moved to Princeton, N.J., to earn his master of theology at Princeton Seminary. “Now I am married to a woman from Ohio and am raising our child to respect both her mother’s and my culture,” says Bala. “Learning to respect different perspectives while also staying true to myself and my values is a skill I have been honing the entirety of my adult life. It is also a skill that seminarians should learn, since most pastors serve outside their place of origin.”

Bala begins his position at PTS Jan. 2, 2018. He joins WMI Director the Rev. Dr. Hunter Farrell in the Seminary’s ongoing commitment to developing mission vision, nurturing missionary vocations, and cultivating missional congregations by helping Christians understand how God is at work in the world and how they can share in that work. Together with a vision and purpose focused on mission mobilization, Hunter and Bala will seek to “lead the church to rediscover its purpose, calling, and missional center.” 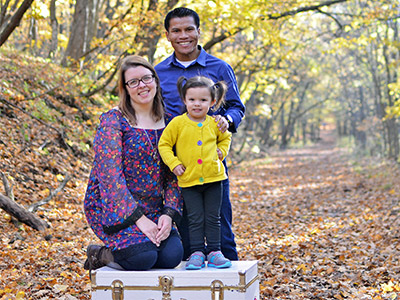