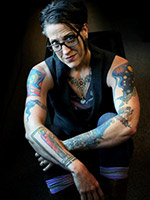 The Rev. Nadia Bolz-Weber is the founding pastor of House for All Sinners and Saints in Denver, Colo. She is the author of Salvation on the Small Screen? 24 Hours of Christian Television (Seabury 2008) and the New York Times Bestselling theological memoir Pastrix: The Cranky Beautiful Faith of a Sinner & Saint (Jericho 2013). Her writings can be found in the Christian Century, The Lutheran Magazine, and Patheos.com. Nadia has been featured in The Washington Post, Bitch Magazine, NPR’s Morning Edition, More Magazine, The Daily Beast, and on CNN.

Nobody really believes she’s an ordained pastor in the ELCA. Maybe it’s the sleeve tattoos or the fact that she swears like a truck driver. Either way…she’s fine with it. Nadia lives in Denver with her family of four where she can be found writing bios in the third person, lifting weights, and walking her Great Dane, Zacchaeus.

"Nadia Bolz-Weber has probably done more than any other pastor in recent times to poke therapeutic fun at the misdemeanors and flaws of overly-churched Christianity and Christians. The passion behind her words, however, is as deeply pastoral as it is God-drenched and liberating . . . thus the affection as well as the respect that attend her and her work wherever she goes." Phyllis Tickle (1934-2015), author of The Great Emergence

"Unforgettable, hilarious, insightful, self-effacing, ironic, and Lutheran - not words that go together every day. Pierced and tattooed, theologically deep, a mom, a fire-and-Pentecost progressive preacher, a stand-up comic . . . also an unlikely list of descriptors. A gifted writer, a liturgical acrobat, an honest and outspoken sinner-saint, the person you should invite to your next event where you need a deep, engaging, and surprising speaker - I could only be talking about Nadia Bolz-Weber." - Brian McLaren, author of A New Kind of Christianity

"Nadia Bolz-Weber is what you'd get if you mixed the DNA of Louis C.K., Joey Ramone, and St. Paul. She is by far my favorite tatted-up, cranky pastor ever. “ - A. J. Jacobs, author of The Year of Living Biblically