Benjamin Wiggershaus ’10 (affectionately known by friends as Benny Wiggs!) grew up in Ohio as the younger brother of two star-athlete siblings. “I did well in sports,” says Ben, “but not as well as my brother and sister. My parents identified me as the one who did well in school.” Ben didn’t mind.

Fast forward to college life at the University of Cincinnati. “There, as a young adult, I started becoming aware of some serious issues in my family, and those realizations had rather dramatic effects on me. My emotional health suffered; my spiritual health suffered; and as a result so did my academic ‘health,’” Ben observes. “My experience as a student in a big university was that professors didn’t engage much with undergraduates,” he recalls, “so when a couple of my professors took a personal interest in some of the papers I was writing, it made a real difference.” A helpful one.

Ben was majoring in classics. “One professor in particular—my Greek professor, for whom initially I’d done very well—noticed my work was slipping. She pulled me aside to talk.” Ben got the impression his professor was a person of faith but couldn’t talk about that aspect of life in the UC classroom. “That impression helped me realize that the classroom can be a true field of ministry—at a crucial time in the lives of young people figuring out their direction and place in the world. Professors didn’t seem to take much advantage of that opportunity.” So Ben began taking his faith more seriously. He studied the Bible on his own. He considered what his career—his calling—might look like in terms of ministry.

“I started feeling called to a teaching profession, but I wasn’t pursuing a degree in education. So I looked around at graduate schools to see what was available from a faith-based perspective,” Ben notes.

“I came across Pittsburgh Seminary and noticed it offered classes in archaeology, an archaeological museum, and opportunities to participate in field work. That fit with my interest in classics, so I made a ‘cold call’ (actually a ‘cold e-mail’) to Dr. Tappy. Because of my university experience, I didn’t expect much of a response, if any. But he answered me with a very long e-mail. The fact that Dr. Tappy showed such an interest in my questions and took so much time to respond led me to apply to PTS—and participate in the Seminary’s dig the next summer” (and multiple summers after that!).

As a student at PTS, Ben did well academically. He credits the personal interaction with professors for turning his undergraduate struggles into graduate success. After earning his M.A., he took a full-time job as director of Christian education at a church in Cincinnati, became certified to teach in Ohio at the secondary school level, then taught Bible, history, and English for three years at a private Christian school—and with his wife, Amanda, started a family!

“Then Amanda and I revisited my goal to teach in a higher-educational setting,” notes Ben. “We decided that if I were ever going to do doctoral work to pursue that goal, it would be best to do it while our kids were young.” And soon they found themselves heading to Asbury Theological Seminary, where, as a doctoral student in Old Testament, Ben has concentrated on the Pentateuch. His dissertation, which he’ll defend this spring, focuses on Numbers 22-24—the so-called Balaam Cycle. “The background I received at PTS in comparative studies, history, and texts of the ancient Near East has enabled me to offer new insights into these enigmatic chapters in Numbers,” says Ben. A novel approach to understanding an old narrative—who knew?! 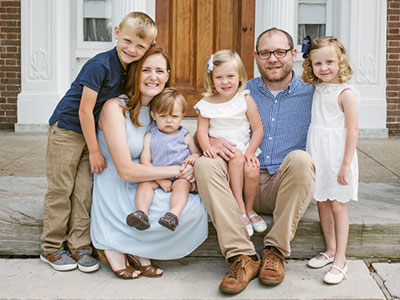