At the age of 100, the Rev. Dr. Casper I. Glenn ’46 continues to exemplify a life of devotion to church and community. And for these many reasons, Pittsburgh Theological Seminary is honoring Casper with the 2022 Distinguished Alumnus in Pastoral Ministry Award.

Throughout his ministry Casper was active in the civil rights movement and the NAACP. Under his leadership the multi-racial Southside Church in Tucson became a central meeting point for the movement and was crucial in bringing about change. While visiting Tucson in 1959, the Rev. Dr. Martin Luther King Jr. asked to meet Casper. Southside’s congregation included many Papago (Tohono O’odham) Native Americans, and together he and King visited their reservation.

Casper moved to Los Angeles, Calif., in 1964, to serve as pastor of Bel-Vue Presbyterian Church. The next year he left his pulpit for two months to work in the streets during the Watts Rebellion. His constant connection with those who were participating in the rebellion kept the area buildings and residents safe and protected.

In 1978, Casper became the first Black synod executive for the PC(USA) to be assigned to the Alaska-Northwest territory. In this capacity he represented the church domestically and internationally, including taking part in interfaith peace initiatives.

In the 1980s and 1990s, he pastored Loresho Presbyterian Church in Nairobi, Kenya, led church development in East Africa, and with his wife, Vernilla, established schools and educational opportunities for young women in Nairobi.

In a 1975 interview, Casper said, “I am a product of the Black church where the primary emphases have always been liberation. I have therefore seen all human need from that perspective. During all of my ministry, I have put great emphasis on the need of the Church to respond to both man’s societal and spiritual needs.” 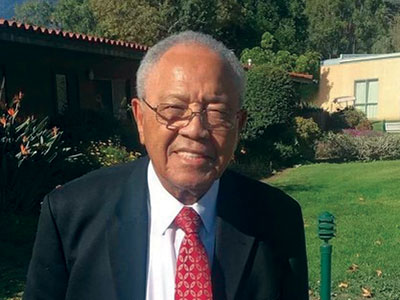