Advancing the Seminary in a Pandemic

Aside from the cold winters, the Rev. Charles Fischer III enjoys his position as Pittsburgh Theological Seminary’s vice president of seminary advancement. “I enjoy the people I work with here, and that’s important,” he says. “It makes the work environment better to have positive and meaningful relationships like we do here.”

Charles’ work since arriving at PTS in November 2019 has primarily focused on all outward facing aspects of the Seminary: development, donor relations, alumnae/i relations, strategic initiatives, special projects, and communications. The pandemic has made this work more difficult over the past two years, but Charles brings a wealth of experience. For over two decades, he has worked in development and advancement at several institutions, including his undergraduate alma mater Morehouse College (Atlanta, Ga.), Saint Augustine’s University (Raleigh, N.C.), and Virginia Theological Seminary, where he earned his master of divinity.

Part of what Charles enjoys about his role at PTS is making connections and relationships with people. He recently returned from a trip to California and Arizona with PTS President Asa Lee, where they and other Seminary representatives connected with alumnae/i, Seminary board members, and friends of the Seminary. “I like discovering and reconnecting with alumnae/i and others, and showing them how they can help us get the Seminary to the place we want to go but can’t get to without their help,” Charles says.

He’s also been listening to the Seminary’s leadership for current priorities in order to effectively communicate those priorities to the Seminary’s constituents. Right now, the big question is how PTS will meet the new challenges of theological education. Everything from teaching methods, institutional events, and the expansion from physical to virtual space has been affected by the pandemic, which has overlapped with most of Charles’ time here.

Still, he doesn’t let these challenges distract him from the primary goal of Pittsburgh Seminary. “We have to remember that we’re here to graduate students in service to the Church and the world,” he says. “Everything we do is toward that goal.”

One way he plans to maintain that focus is by reimagining and increasing participation in Seminary-wide events. He hopes that as PTS returns to larger gatherings like lectures, Alumnae/i Days, and commencement, these events will bring together students and faculty; staff from all areas; and alums, friends, and family of the Seminary from near and far to celebrate the progress and achievements of the PTS community.

Charles knows that celebrations are made more meaningful by the hard work and struggles along the way. He experienced that on a personal level in 2021 when his beloved Atlanta Braves celebrated their first championship in 26 years. Charles shares a love of sports with his two sons, ages 14 and 6, with whom he’s also taken up golfing as a family activity. 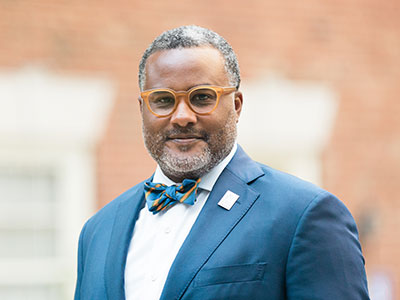