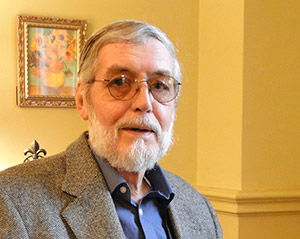 David McCreery ’73, professor of religious studies and archaeology, has taught at Willamette University, Ore., since 1988 and co-directed the Tell Nimrin Excavation (Jordan) since 1986. A Near Eastern archaeologist specializing in Early Bronze Age agriculture, he held the position of director and professor of history and archaeology at the American Center of Oriental Research (ACOR) in Amman, Jordan, from 1981 to 1988. (ACOR promotes research and publication across disciplines, with special emphasis on archaeology in the region.) He has also served as paleobotanical consultant for numerous archaeological projects in Jordan.

David has provided leadership both for ACOR, as a member of its board since 2006 and as director and professor of archaeology emeritus since 2007, and for the American Schools of Oriental Research (ASOR, founded in 1900 to further the study of the cultures and history of the Near East from earliest times to the present), as a board member and as former chair of its Committee on Archaeological Policy. He served as a staff member for ASOR’s 1977 archaeological survey of Syria and in 1980 as archaeological advisor for Jordan’s Department of Antiquities on its “Development of a Five Year Plan.”

David’s archaeological consulting work has included advising for Jordan’s Sustainable Tourism Development, Cultural Resource Management, and Naur/Dead Sea Highway Survey projects, among others. His abundant field experience includes the Idalion Expedition to Cyprus and the Bâb edh-Dhrâ’ and Numeira Excavations in Jordan, for which he served as field supervisor and supervisor of flotation (a technique especially useful in recovering botanical remains).

David has published numerous articles, monographs, and booklets on topics ranging from exegetical studies of the Hebrew Bible to paleobotany and Bronze Age agriculture, from economic development and archaeology in the Middle East to excavation reports and historical studies. He frequently gives public lectures to service organizations and church groups on Near Eastern archaeology, biblical studies, and the modern political situation in the Middle East. In 2009, Willamette University awarded him the United Methodist Award for Exemplary Teaching and Service.

David earned his bachelor’s from Sterling College, Kan. (1969); his master of divinity from Pittsburgh Theological Seminary; and his doctorate from the University of Pittsburgh/Pittsburgh Theological Seminary (1980). His dissertation was titled “The Nature and Cultural Implications of Early Bronze Age Agriculture in Southern Ghor of Jordan – an Archaeological Reconstruction.” In the years from 1970 to 1975, he studied theology and foreign languages at a number of universities in Europe.

David and his wife, Linda, have one daughter and live in Salem, Ore.