“Every time we get a chance to get ahead they move the finish line. Every time.” - Mary Jackson, Hidden Figures

Pittsburgh Seminary student and West Mifflin native Elayne Arrington knows first-hand the bitter disappointment and devastation of the injustice expressed by Mary Jackson, who was Elayne’s contemporary and one of the unsung heroines of the recent Blockbuster hit Hidden Figures—the story of three brilliant African-American women at NASA who serve as the brains behind the launch of astronaut John Glenn into orbit.

Despite Elayne finishing first in her class at Homestead High School (now Steel Valley) in 1957, and earning a score of 797 out of 800 on her SAT mathematics test, Elayne was denied the right to deliver the valedictory address. Instead the speech was given by the white male class president.

In the end, the commencement exercises became a demonstration of God’s just sense of agency—announcements made about her SAT scores being the second highest in the country, her University of Pittsburgh Honor Scholarship, her National Merit Scholar designation, and her receipt of several local scholarships rightfully reoriented the graduation spotlight. “My parents told me that I could do or be anything that I wanted if I really tried,” Elayne remembers with gratitude.

When Elayne entered the Mechanical Engineering Department at Pitt as an undergraduate, she was recommended for the coveted Mesta Machine Company Scholarship, which was awarded by the company annually to the incoming student with the best academic record in hopes that the recipient would work for Mesta upon graduation. However, the prestigious scholarship was subsequently awarded to a male student after the company took Elayne out of the running, asserting that “girls don’t finish” engineering programs. Upset but undeterred by this setback, Elayne, a distinguished member of Pi Tau Sigma (an academic engineering fraternity), became the first African-American woman to graduate from the Pitt’s School of Engineering.

Upon graduation, Elayne became a hidden figure, taking her rightful place in the Technology Division of Wright-Patterson Air Force Base in Dayton, Ohio, where she conducted performance analysis on Soviet Union aircraft. While earning her master’s in mathematics from the University of Dayton, Elayne, a Charles Phelps Taft Fellow, took mathematics courses at Oxford University and Saltzburg, Austria. She became the 17th African-American woman in the country to earn a doctor’s of philosophy in mathematics in and returned to Pitt where she was an associate professor of mathematics for more than 40 years, and where she continues to teach.

Having been baptized at the age of nine, Elayne’s faith has always been important to her. As a youth, she attended Sunday school and church, and was active with the Baptist Young People’s Union. Later she taught Sunday school and pursued her interest in Christian education by taking theological studies classes at the University of Pittsburgh.

Elayne, who now serves as the director of Christian education for the Allegheny-Union Baptist Association and as state dean for the Pennsylvania Baptist State Convention, was drawn to PTS because of the koine Greek courses. “I wanted to be able to read the New Testament in the original language.  I have taken all of the Greek courses and enjoy the rigor of the academics,” says Elayne of her journey towards linking “infinity with divinity.” 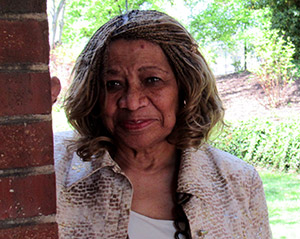