The faculty—the heart of the educational experience at Pittsburgh Theological Seminary—further our tradition of academic excellence through teaching, research, publication, and service to the church. In recognition of their academic endeavors, on Nov. 8, 2022, five faculty members were installed in endowed chairs.

We give God the glory for these scholars and their contributions to the Seminary community.

The Rev. Dr. Leanna Fuller is associate professor of pastoral care and through 2022 will continue serving as interim vice president for academic affairs and dean of faculty. She is a graduate of Vanderbilt University (Ph.D.), Vanderbilt Divinity School (M.Div.), and Furman University (B.A.). Her most recent book is titled When Christ’s Body is Broken: Anxiety, Identity, and Conflict in Congregations (Wipf and Stock, 2016). Fuller has earned numerous fellowships, awards, and honors. She was selected to participate in the 2016-2017 Wabash Center Workshop for Early Career Theological School Faculty, and she received the Louisville Institute Dissertation Fellowship in 2010-2011. Fuller’s most recent conference paper, “One Body, Many Parts: An Ecclesiology for Churches in Conflict” was presented at the American Academy of Religion Annual Meeting. Her ministry experience includes serving as associate pastor of Oakland Christian Church in Suffolk, Va., where she coordinated youth ministry and Christian education programming. Fuller also worked as chaplain resident at Riverside Regional Medical Center in Newport News, Va., providing pastoral care for patients.

Dr. Scott Hagley joined the Pittsburgh Seminary faculty in 2015. Formerly, he served as director of education at Forge Canada in Surrey, British Columbia, where he worked to develop curriculum for the formation of missional leaders in hubs across Canada. He also served as teaching pastor at Southside Community Church, a multi-site church in the Vancouver metro area organized around neighborhood-based missional communities. Hagley received a B.A. in youth ministry and communication from Bethel University, an M.Div. from Regent College, and a Ph.D. (with distinction) in congregational mission and leadership from Luther Seminary. His doctoral dissertation attended to the lived theology of an urban congregation in its public, evangelical, and missional dimensions. Hagley has also taught courses at Augsburg College, Rochester College, Bethel University, and Luther Seminary, and previously he was a consultant and researcher with Church Innovations Institute. He has lectured at denominational meetings and retreats on topics such as missional communities, faith, and spiritual formation. Beyond preaching, Hagley’s service to the church has been in the areas of research, curriculum development, and youth ministry. He has published numerous articles and book reviews on church- and mission-related topics. His most recent book is Eat What is Set Before You: A Missiology of the Congregation in Context (Urban Loft, 2019).

The Rev. Dr. Angela Dienhart Hancock serves as associate professor of homiletics and worship and incoming vice president for academic affairs and dean of faculty. She is an ordained Minister of Word and Sacrament in the Presbyterian Church (U.S.A.) and has served as pastor to churches in Pennsylvania, Kentucky, and Tennessee. Hancock is the author of Karl Barth’s Emergency Homiletic, 1932-33: A Summons to Prophetic Witness at the Dawn of the Third Reich, a contextual interpretation of Swiss theologian Karl Barth’s lectures on preaching in the early 1930s, based on unpublished archival material. Her current research explores Karl Barth’s contribution to the ethics of deliberation in Christian communities and the relationship between political and theological rhetoric. Hancock continues to preach, teach, and lead worship in a variety of settings.

The Rev. Dr. L. Roger Owens received his Ph.D. in theology from Duke University where he was awarded a Lilly Fellowship for the Formation of a Learned Clergy. Before that he completed his M.Div. at Duke Divinity School. As an undergraduate he studied philosophy and Bible/religion at Anderson University in Indiana. Before coming to Pittsburgh Theological Seminary, Dr. Owens served both urban and rural churches in North Carolina for eight years as co-pastor with his wife, the Rev. Ginger Thomas. As a Minister of Word and Sacrament in the Presbyterian Church (U.S.A.), Dr. Owens currently serves as co-senior pastor of Fox Chapel Presbyterian Church with his wife in addition to his work at the Seminary. His books include Everyday Contemplative: The Way of Prayerful Living (Upper Room Books, 2022), Threshold of Discovery: A Field Guide to Spirituality in Midlife (Church Publishing, 2019), A New Day in the City: Urban Church Revival (Abingdon, 2017), What We Need Is Here: Practicing the Heart of Christian Spirituality (Upper Room Books, 2015), Pastoral Work: Engagements with the Vision of Eugene Peterson (Cascade Press; edited with Jason Byassees), Abba, Give Me a Word: The Path of Spiritual Direction (Paraclete Press, 2012), Wendell Berry and Religion: Heaven’s Earthly Life (University of Kentucky Press, 2009; edited with Joel Shuman) and The Shape of Participation: A Theology of Church Practices (Cascade Press, 2010), which was called “this decade’s best work in ecclesiology” by The Christian Century. Dr. Owens has preached and lectured across the country, and his work has appeared in The Christian Century, Currents in Theology and Mission, The Journal of Religious Ethics, New Blackfriars, and elsewhere. Dr. Owens serves on the faculty for the Upper Room’s Academy for Spiritual Formation, where he lectures on the history and practice of Christian spirituality. Dr. Owens and his wife are the parents of Simeon, Silas, and Mary Clare. 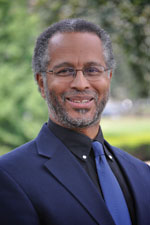 The Rev. Dr. R. Drew Smith earned his undergraduate degree from Indiana University, and his master of divinity, master of arts, and Ph.D. in political science from Yale University. He has initiated and directed a number of projects related to religion and public life which have collected research data on political involvements, community development activities, and outreach ministries of churches, especially African American churches. He has also conducted similar research in South Africa and East Africa, including while serving in 2005 as a Fulbright professor at the University of Pretoria. His research over the years has been funded by sources such as Pew Charitable Trusts, Annie E. Casey Foundation, Luce Foundation (including two current projects at PTS on gentrification, race, and theological education and COVID-19's impact on Black and Latinx communities in metro-Pittsburgh), Ford Foundation, and Templeton Foundation, and has totaled almost $2.5 million in grant monies. He has served since 2010 as co-convener of the Transatlantic Roundtable on Religion and Race, an initiative that convenes scholars, religious leaders, and community activists from across the transatlantic region for purposes of advancing progressive approaches to persistent racial problems in various contexts. In addition, as a Baptist clergyman, he has ministered in a number of parish, prison, and campus ministry contexts. He has published widely on religion and public life, having written numerous articles and chapters, and edited or co-edited 10 books, including Racialized Health, COVID-19, and Religious Responses: Black Atlantic Contexts and Perspectives (2022).